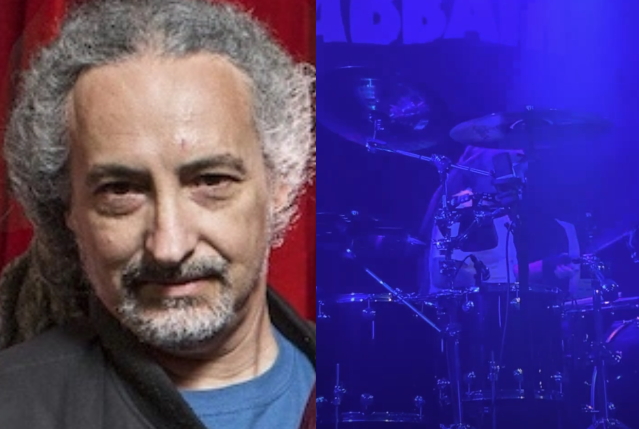 FAITH NO MORE drummer Mike Bordin joined the BLACK SABBATH tribute band BACK STABBATH Sunday night (July 31) at Cornerstone in Berkeley, California to perform the SABBATH classic "Beyond The Wall Of Sleep". Video of his appearance can be seen below.

BACK STABBATH features in its ranks former D.R.I. bassist Harald Oimoen who is perhaps best known as one of the photographers behind the 2012 photojournal book "Murder In The Front Row" which chronicled the 1980s San Francisco Bay Area thrash metal scene.

Bordin regularly performed SABBATH material with Ozzy Osbourne while he was a member of the SABBATH singer's solo band between 1996 and 2010.

In a 2015 interview with Radio.com, Bordin spoke about his involvement in the controversial 2002 re-recordings of the drum and bass parts on Ozzy's classic first two solo albums, 1980's "Blizzard Of Ozz" and 1981's "Diary Of A Madman".

The tracks originally played by Bob Daisley and drummer Lee Kerslake on both albums were replaced on the reissue by Bordin and Robert Trujillo (now in METALLICA) after Daisley and Kerslake sued Ozzy and Sharon Osbourne over royalties. They were restored for the 30th-anniversary editions.

Asked if it was weird to play drums on the re-recordings of "Blizzard Of Ozz" and "Diary Of A Madman", Bordin told Radio.com: "That was really kind of a fucked up thing… That wasn't what I was going in expecting to do [when I went into the studio to record those tracks]. So, that's all I'll say about it. I'm not ever going to throw anyone under the bus, ever. But when it turned out that that's what the reason was [for re-recording those tracks]… I never knew that. That doesn't lessen the fact that it happened. But that wasn't the way that it was presented to me at all. It was weird."

He continued: "I will say this: to hear the original guitar, bass and drum tracks in my headphones while I was recording, was one of the most insane things that I will probably ever experience. I also think I heard some guitar solos that I'd never heard before."

Bordin went on to say: "There's a reason why those albums are so good, and why people love them so much. They're magical. That's down to all the guys who made those albums. Far be it from me to ever want to fuck with that. It's something to be treasured."

After Bordin was reminded that the original albums were eventually restored for the 30th-anniversary editions, he said: "They had to [do that]. It was just weird."

TONIGHT❗️ Come see the BEST movie EVER made about our Local Thrash Metal Scene on a state of the art movie screen with a...

Come to the Stabbath !! This Sunday at Cornerstone !
The Heaviest night of your lives !!!!