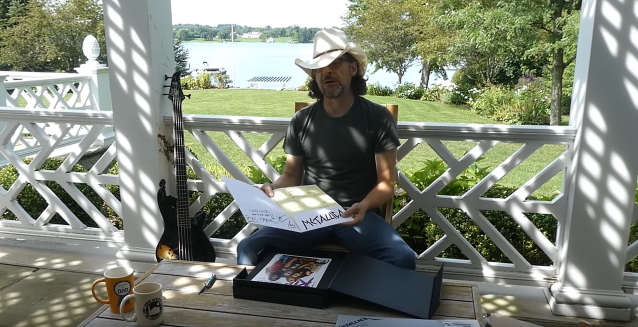 A 15-minute video of former METALLICA bassist Jason Newsted unboxing the upcoming limited-edition deluxe box set version of the band's classic 1991 self-titled LP, better known as the "Black Album," can be seen below.

"Metallica" marked Newsted's second studio album with METALLICA after he joined the group in 1986 as the replacement for the late Cliff Burton.

In a 2016 inteview with Billboard, Newsted reflected on the "Metallica" writing and recording process, saying: "Everybody had built themselves up through hard knocks and scars and so forth to be ready for what was coming, to create this thing that was bigger than all of us and greater than any of us. That includes all the people that worked with us, like the label and QPrime [management] and [producer Bob Rock]. [Rock] came in and he whipped us into shape about tonality of things and power of things and actual sound quality. We were ready for him, he was ready for us, the world was ready for the sound. We didn't sit down and say, 'It's gonna be like this,' no, but I think we pulled in somebody who could control us for a second, harness us for a second, and everybody put their nose to the stone and worked hard, like METALLICA always did, and the floodgates just opened and we got the fruits from it. I'm really proud of what we did."

Newsted added that his favorite song on "Metallica" is "Sad But True" — "Just because of the weight, the six-string bass and that big, big bottom," he said — but he was also very fond of "My Friend Misery", on which he had a songwriting credit. "It was the bass, by itself, introducing that song, which was not the easiest thing to do at that time within that band," he explained. "That was a moment where those guys kind of bowed and said, 'Here you go, man, put your song on there,' being the guy who came up with that; as opposed to being part of the team, I got to be myself for a minute there, which was a real accomplishment."