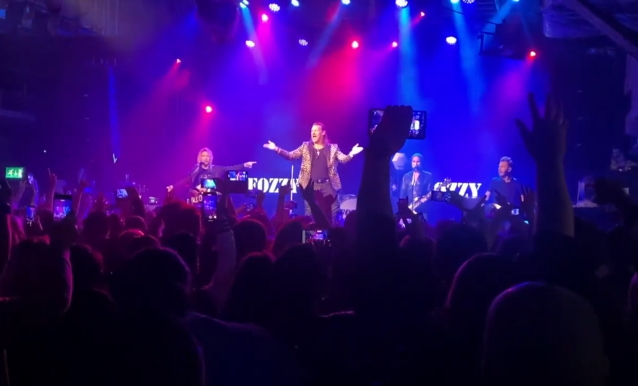 FOZZY held what was being billed as the "Ultimate Fozzy Fan Fest" Sunday night (December 12) at the O2 Academy Islington in London, England. The final show of the band's U.K. tour started with a world-exclusive premiere listening party of FOZZY's upcoming album, "Boombox". The LP isn't due out until April 15, 2022, but fans got a chance to hear all 12 new songs for the first time ever in a live setting with the bandmembers themselves. Then FOZZY singer Chris Jericho hosted a question-and-answer session with questions submitted by fans. Fans were invited to come up with their best questions and present them at FOZZY's merch booth, along with their names and where they were from (pen and paper will be provided) and Jericho chose the best ones for him and the band to answer. The event concluded with the band playing two of its biggest songs, "Enemy" and "Judas", live, with special guest vocalists — the fans themselves.

Photos and fan-filmed video footage of the "Ultimate Fozzy Fan Fest" is available below.

Jericho, a former WWE world wrestling champion who currently competes for All Elite Wrestling, was unable to sing at the London concert on doctor's orders due to medical reasons.

Prior to the London gig, FOZZY canceled two shows on its U.K. tour after Jericho was hospitalized.

Chris has not yet publicly commented on the exact nature of his illness.

FOZZY had already played nine shows as part of a 12-date "Save The World" tour of the U.K. before being forced to scrap Friday night's concert in Swansea and Saturday night's show in Nottingham.

Ultimate Fozzy Fan Fest!! Bit of a different show tonight but was awesome to hear the new album and everything else.