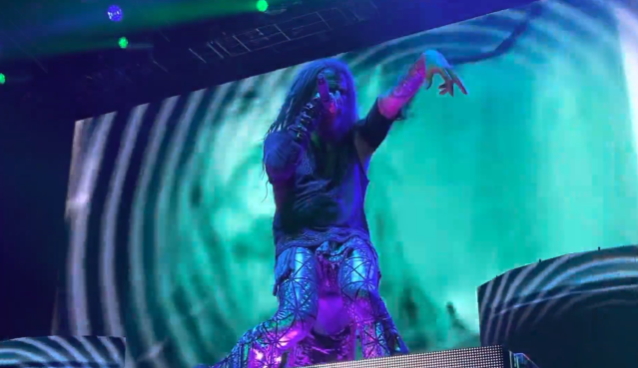 Rob is continuing to tour in support of his latest album, "The Lunar Injection Kool Aid Eclipse Conspiracy", which was his first No. 1 on Billboard's Top Album Sales chart. The follow-up to 2016's "The Electric Warlock Acid Witch Satanic Orgy Celebration Dispenser" is a classic Zombie album to its core, with high-energy rages like "The Eternal Struggles Of The Howling Man" and "Get Loose" to heavy-groove thumpers like "Shadow Of The Cemetery Man" and "Shake Your Ass-Smoke Your Grass". The new album is produced by Chris "Zeuss" Harris. The multiplatinum singer and filmmaker's first LP with Nuclear Blast cracked the top 10 in several countries, including Germany, Canada, Scotland, and Australia. In the United States, it's Rob's seventh consecutive Top 10 album since his first solo outing in 1998.

Regarding the "The Lunar Injection Kool Aid Eclipse Conspiracy" album title, Rob said: "I like to try to think of an album title that you've never heard before — even though it's probably one that you cannot remember. 'Cause nothing bothers me more than when I see the same title on multiple records. I'm, like, 'C'mon, man. There's a lot of words out there.' And I don't just string crazy stuff together, even though it sounds like it… I spend a long time on the title, and it changes constantly. When I first start the record, I don't know what anything is gonna be called, I don't know what it's gonna sound like. And then as the record starts forming, I start coming up with multiple titles, or ideas for titles. And then, by the time the record's done, I usually have what I think might be the title. And everyone's, like, 'What's the title? What's the title?' And I'm, like, 'Ehhh… I don't know yet,' even though I do know. And then I start messing around with the artwork, and then I'll change the title again, because I'm, like, 'Oh, now that doesn't look like that. It doesn't fit.' So, as random as it may all seem, I spent a lot of time trying to [find the right title for the record]. And hopefully, when you're done listening to the record, what may sound like nonsense before you hear the music, after you've heard all the music, you can think to yourself, 'Well, of course, the only thing this album could have been called is 'The Lunar Injection Kool Aid Eclipse Conspiracy'."

As a rock icon and filmmaker with a unique vision, Rob has continuously challenged audiences as he stretches the boundaries of both music and film. He has sold over 15 million albums worldwide and is the only artist to experience unprecedented success in both music and film as the writer/director of eight feature films with a worldwide gross totaling more than $150 million. Each of Zombie's seven solo studio albums has debuted in the Top 10 on the Billboard 200 chart, including "The Lunar Injection Kool Aid Eclipse", in 2021. Zombie is an eight-time Grammy nominee, with his most recent nomination up for "Best Metal Performance" at the 2022 awards. Zombie's ninth feature film, "The Munsters", is due later this year.