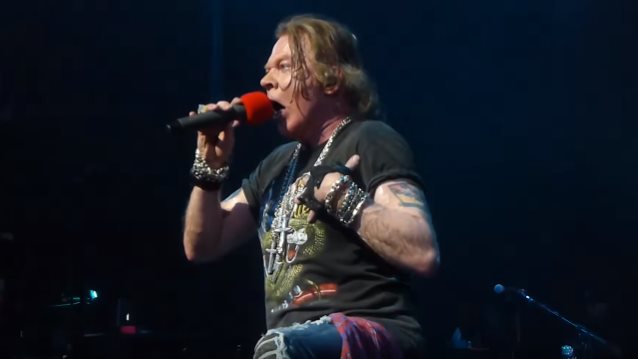 GUNS N' ROSES frontman Axl Rose is featured in the latest episode of the GTV Reality video web series, where Giovanni Arnold can be seen meeting celebrities for autographs and filming every encounter POV (point of view).

In the two-minute clip, Axl can be seen being cordial to fans after GUNS N' ROSES' intimate show in New York before attempting to get into the wrong car. He then apparently spots his ride but decides against getting into the vehicle when he realizes that are other people inside the car. Fans and paparazzi attempt to get more autographs from Rose and a frustrated Rose asks them to leave him alone.

GUNS N' ROSES performed at Harlem's world-famous Apollo Theater last Thursday night (July 20) for a special invitation-only concert for SiriusXM subscribers. The gig marked the first time that the band played at the iconic venue. The special event, taking place before the next leg of the band's North American "Not In This Lifetime" tour, aired live nationwide on SiriusXM's Guns N' Roses Radio. The concert also aired live on Howard Stern's Howard 101 channel.