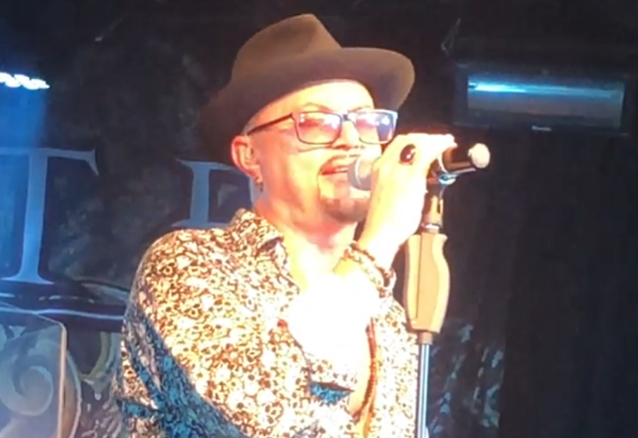 According to Eonmusic, a visibly emotional Geoff Tate performed QUEENSRŸCHE's "Promised Land" album in its entirety for the first time ever on Sunday night (August 28) in Belfast. While appearing at the intimate Limelight 2 venue in the Northern Ireland city, Tate broke down a number of times during the performance of the 1994 set.

Following the atmospherics of the original with intro "9:28 a.m.", "I Am I" kicked off what would be a very special evening for both the audience and the former QUEENSRŸCHE frontman. With a spectacularly on-point band behind him, Tate arrived to a hero's welcome, attacking the "Promised Land" material — which veers in mood, scope, and dynamics — with a renewed vigor.

During the underrated gem "Damaged", it was clear, even from this early stage that the singer was in fiercely impressive form. "Out Of Mind", which followed, brought with it the first real revelation of the evening. Tate confessed he hadn't performed the song for almost three decades, telling the crowd, "I've not done it since '95", before introducing the track as "a song about mental illness that seems to fit exactly in this day and age."

Despite being written solely by guitarist Chris DeGarmo about his strained relationship with his father who died during the "Promised Land" sessions, it was during "Bridge" that the singer first became emotional, breaking down as the emotive song unfolded. Visibly weeping, clutching a handkerchief, and caught up in the moment, he said: "I was being interviewed earlier today was asked about what it feels like to perform the 'Promised Land' album. I had a clever answer prepared, but I can't think of what that is right now." Fighting back the tears, he continued, "I just know that I'm very happy to be here tonight."

Staying faithful to the album's running order, the epic title track followed, which saw Geoff don his saxophone and take on an extended solo. Reaching the second half, the album's deeper cuts continued, including the off-kilter "Disconnected", the dark "Lady Jane" and progressive "My Global Mind".

Closing the first set with the stripped down piano an vocals of "Someone Else?", the singer once more was reduced to tears, as the stirringly emotional refrain of "Here I stand at the crossroads edge / Afraid to reach out for eternity" rang out across the venue.

In a recent interview with the "Thunder Underground" podcast, Tate touched upon the possibility of performing "Promised Land" from front to back, saying: "We did it when it first came out, but that was almost 30 years ago. I'd like to do that one [in its entirety], although it's a bit of a dark album. I'm not sure that it would be a candidate for doing something like [that]. I might have to marry it with another album, 'cause it's a bit — I don't know — stark, a little bit introspective.

Asked if he had good memories of the making of "Promised Land", Geoff said: "I have really definitive memories of it, actually. I'm not saying they're all good memories, but there were some interesting times. We made the record under extreme circumstances. We hadn't talk to each other in three years after we finished the 'Empire' tour, and the record company was knocking at the door for another record. And we knew we had to get in the studio to make one. None of us really wanted to be in the same room, but we had to do it. So I came up with this idea, 'Well, let's get everybody together on a remote island and we'll all sit in one place for a few months and throw around a bunch of ideas and see what happens and maybe kind of get back to being a band again,' like we were on maybe the first album. That didn't work. [Laughs] We still went and did that plan, but I think the drummer, [Scott] Rockenfield, he stayed for two weeks. He got all his parts done and left. And then the same with Eddie [Jackson, bass]. He was there about a week; he got done and left. Michael [Wilton, guitar] did some parts. He was there about three weeks and left. And it was just Chris [DeGarmo, guitar] and me and our engineer for six months [laughs], staying on the island, making the record.

"It was good. It was interesting," he continued. "I have good memories of being there. It was the kind of a situation like this where we lived in this log cabin on this remote island. We put the studio together. It took us a couple of different tries to get the studio to work, 'cause our first attempt kind of failed, putting all the gear together. But then we got the right setup set up, and then it was kind of magical. Being there in this remote place. The ocean was [very] close, and there was whales and seals and all kinds of wildlife. And it was quiet — really super quiet. So the only thing you heard was what was going on your head. So we took that, what was going on in our heads, and made music out of it."

Pressed about whether he was surprised by the fact that "Promised Land" wasn't as commercially successful as the two albums immediately preceding it, Tate said: "I've never been surprised. The '[Operation:] Mindcrime' album was the one that caught us all off guard because we weren't expecting it to be as big and popular as it got, 'cause it was really dark and very challenging for people. But we had just tremendous airplay and video play as well, with MTV. So it went from nothing to five hundred thousand — boom — and then it went to a million and then it went to two million… And then 'Empire' was a little bit more out of the box because the record company was really geared up and ready and had a really fantastic team of people that were promoting the record. And it definitely got a lot of airplay. 'Promised Land'didn't get so much airplay, 'cause everything was shifting at that point in the record industry, so it was kind of left on its own. Although it sold 1.5 million albums — something like that — which is nothing to sneeze at."

Tate previously shared his feelings on "Promised Land" in a 2015 interview with Classic Rock Revisited. He said at the time: "Well, I quite liked that record. It's one of my favorite records that I've done. I just think there's a lot of really interesting music on it. And I think of all the albums that we made up until 'Promised Land', it was the first one to capture a certain mood, overall, with the album, and stay in that mood, and not deviate a lot from song to song. It seemed to me at the time that the records we did previously, they were kind of sporadic in the… not sporadic — I don't mean that to be negative, but just varied song choices and flow to the record, that kind of thing. Where 'Promised Land' had a certain feel to it. It's kind of hard to define, but I would say that on it, we found a space, and we stayed there through the entire record, not deviating from that space too much. Which I liked; I like that kind of thing. It's quite challenging to make something like that."

Regarding how the three-year period of intensive touring between "Empire" and "Promised Land" affected the relationships between the QUEENSRŸCHE bandmembers, Geoff said: "Well, we never were like a really close group of people. But leading up to "Promised Land", it was a tumultuous time with a lot of... well, like you said, a lot of touring, a lot of media attention, that kind of thing, which is a direct influence... it was actually what really influenced 'Promised Land'. It was the whole premise of the record. The whole premise of the record was that as Americans, we're really tuned into and trained to compete, and to win, and to accumulate things and goods, an accumulative position. Success is very important to Americans. And so I felt like we, as a band, had reached that pinnacle of success, that we had done and achieved all of the things that are sort of associated with being a musician. And so 'Promised Land' was a reflection on that. You know, "What does it all mean? Is it really that important? Is it very important? Is it something that… where do you go from there?" It's almost like people think that success is this platform that you reach — and it really isn't. It's a never-ending ladder. It just keeps going and going and going; the ladder keeps going and you keep climbing and climbing. There's never an end to it, you know? [Laughs]"

Prior to that, Geoff celebrated the 30th anniversary of "Operation: Mindcrime" on European and U.S. tours.