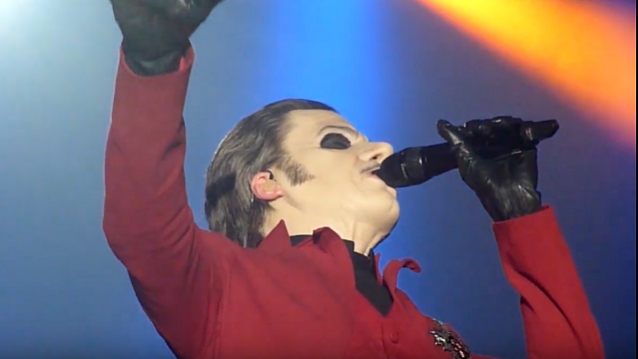 Fan-filmed video footage of GHOST's September 19 concert at WAMU Theater in Seattle, Washington can be seen below (courtesy of YouTube user "The Attitude").

GHOST's current live set includes two new songs, "Kiss The Go-Goat" and "Mary On A Cross", which will both be included on a new limited-edition seven-inch single, due on September 27. Also set for release on the same day is a plethora of limited, exclusive items tied to the "Prequelle" album and world tour. Log on to ghost-official.com for all purchasing information.

"Prequelle" was produced by Tom Dalgety and originally released in on June 1, 2018. The album was nominated for a Grammy Award as "Best Rock Album", and for Sweden's Grammis award as "Best Rock/Metal Record Of The Year", and Dalgety received a Grammy nomination as "Producer Of The Year." Both Revolver and Kerrang! magazines named "Prequelle" the best album of 2018, and the album produced three Top 10 singles — "Rats", "Dance Macabre" (both of which went to No. 1 at Rock Radio) and "Faith". To date, "Prequelle" has accumulated some 250 million streams globally.

GHOST mastermind and lead singer Tobias Forge said in a recent interview that he has had the concept for the band's next album in mind for more than a year.