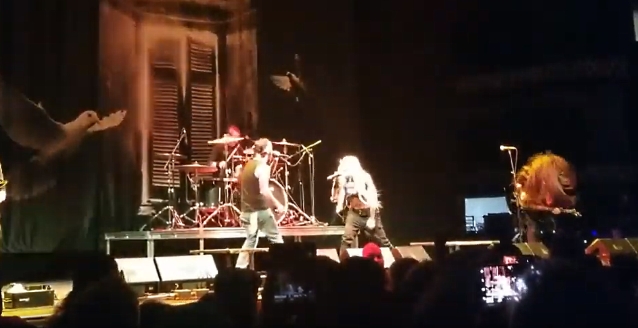 GODSMACK frontman Sully Erna joined STITCHED UP HEART on stage on April 22 at The Armory in Minneapolis, Minnesota to perform the latter band's new single "Lost". Fan-filmed video footage of the performance can be seen below.

"Lost" will be included on STITCHED UP HEART's forthcoming sophomore album, tentatively titled "Darkness". The 13-song follow-up to 2016's "Never Alone" was produced by produced by Matt Good of FROM FIRST TO LAST and D.R.U.G.S.

STITCHED UP HEART has just finished playing five U.S. dates with GODSMACK and VOLBEAT and has kicked off a Canadian tour leg with the same two bands.