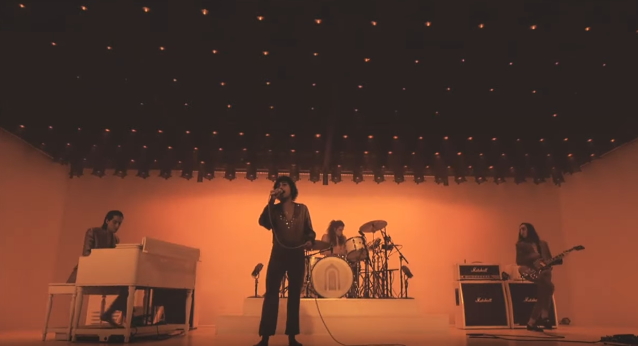 "Heat Above" is taken from GRETA VAN FLEET's sophomore LP "The Battle At Garden's Gate", which will arrive on April 16 via Lava/Republic.

"'Heat Above' is theatrical, eloquent, and exaggerated," explains the group. "This is a dream in the clouds, a moment of peace in the storm. Thematically, we are dead center in the cult of Heaven, surreal, strange, alive and free."

"The Battle At Garden's Gate" reflects heavily on the group's personal and spiritual growth, as well as deepening empathy for the struggles and inequalities others are experiencing.

"We realized that while growing up, we had been shielded by many things," describes drummer Danny Wagner. "As we started to travel a lot, meet new and different people and experience different cultures, our definition of 'normal' changed." Bassist Sam Kiszka adds, "I suppose that everything has changed except what got us here in the first place…our perception of the world, perception of life itself, what it means to be an artist, what it means to be part of a beautiful, gorgeous society. We've gained a larger understanding of why we're all here."

"The Battle At Garden's Gate" was recorded in Los Angeles with producer Greg Kurstin (Paul McCartney, FOO FIGHTERS, Adele). "There was a lot of self-evolution happening during the writing of this album that was prompted by experiences I had, experiences we all had," explains vocalist Josh Kiszka. "It's reflecting a lot of the world that we've seen, and I think that it's reflecting a lot of personal truth," says guitarist Jake Kiszka.

"Certainly after this, we've grown in so many ways," Josh explains. "This album has taught us a lot, about life in general, about ourselves, about all of us, about the world we live in."

Formed in Frankenmuth, Michigan back in 2012, GRETA VAN FLEET consists of three brothers, vocalist Josh Kiszka, guitarist Jake Kiszka, bassist/keyboardist Sam Kiszka, as well as drummer Danny Wagner. Together they have gone on to sell one million concert tickets across multiple continents, perform on "Saturday Night Live" and "The Tonight Show", top the Billboard U.S. Mainstream Rock and Active Rock charts with their debut single "Highway Tune" in 2017, and win the Grammy Award for "Best Rock Album" in 2019 for their debut full length album, "From The Fires".