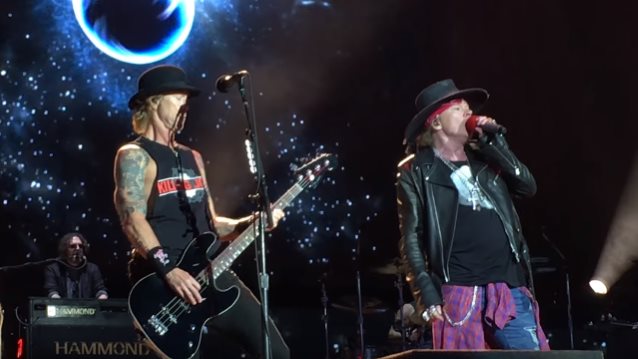 Fan-filmed video footage of GUNS N' ROSES' July 1 performance at Kantolan Tapahtumapuisto in Hämeenlinna, Finland can be seen below (video shot and uploaded by Alex Kornyshev).

The "Not In This Lifetime" tour has grossed more than $230 million since launching in April 2016, according to Billboard.

That figure includes a $38 million haul from eight concerts in Australia and New Zealand, but does not account for earnings from seven Asian markets that the band visited during the first quarter of 2017.

One of the stops on the Australian trek, a two-night stand in Sydney, was the fourth biggest of the entire tour, pulling in $9.2 million from a total of 84,277 tickets sold.

The band, with this same lineup, will come back to North America for at least another 15 stadium dates this summer, starting on July 27 in St. Louis and ending on September 8 in San Antonio.

This summer marks the 30th anniversary of the release of GUNS N' ROSES' classic debut album, "Appetite For Destruction", which arrived on July 21, 1987.