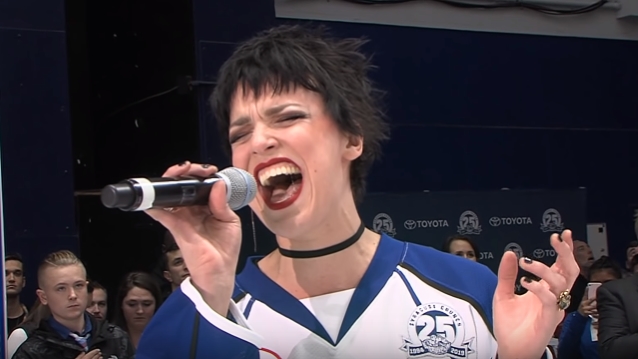 HALESTORM frontwoman Lzzy Hale sang the U.S. national anthem before American Hockey League team Syracuse Crunch defeated the Binghamton Devils on Friday, November 23 at the War Memorial Arena in Syracuse, New York. The Crunch also presented the singer with a custom-made jersey with her favorite number, 10, and her first name stitched on the back.

Lzzy later wrote on social media: "Thank you so much to the @syracusecrunch for having me to SING the National Anthem tonight... what an honor!! Thanks also to the team for the amazing Jersey with my name and favorite number on it!!"

Hale is known for her many outside collaborations, having previously made guest appearances on songs by SHINEDOWN, TRANS-SIBERIAN ORCHESTRA, DREAM THEATER, Lindsey Sterling, Machine Gun Kelly and others.

In an interview with Guitar Girl Magazine, Lzzy stated about her penchant for working with artists in many different styles of music: "There have been a couple of times where I've gotten to play with my heroes. Tom Keifer [CINDERELLA] is one of those, and we got to collaborate and meet a couple of years ago. Now we have barbecues at each other's houses. It's really weird to be friends with basically the guy that got you into guitar. He's a fantastic human, as well. There's just been so many.

"I'm kind of 'in the moment' and know what I'm going to do tomorrow. I have a schedule, and I can prepare for that, but every time, during my career, that I've ever tried to make a five-year plan, it never works out that way," she continued. "It's always like there's a fork in the road. You have to decide how quickly are we moving forward either way. I think that the way that I learn, too, when I learn new things. It's more about saying yes and diving headfirst into the shark tank and then figuring it out as I'm in it. I think that if I plan, it's never going to be as amazing as if I just say, okay I'm just going to immerse myself in the moment. That's usually how I do things and usually, there's a moment of like, oh man, did I get in over my head? Am I in over my head? Then you always kind of figure it out. It's that 'no backup' plan thing. I'm just going to leap, and somehow, I'm going to figure out how to fly."

HALESTORM is continuing to tour in support of its latest album, "Vicious", which came out in July via Atlantic. The disc was recorded last year at Nashville, Tennesse's Rock Falcon recording studio with producer Nick Raskulinecz.

Thank you so much to the @syracusecrunch for having me to SING the National Anthem tonight... what an honor!! Thanks also to the team for the amazing Jersey with my name and favorite number on it!! Photos by @judyhwon