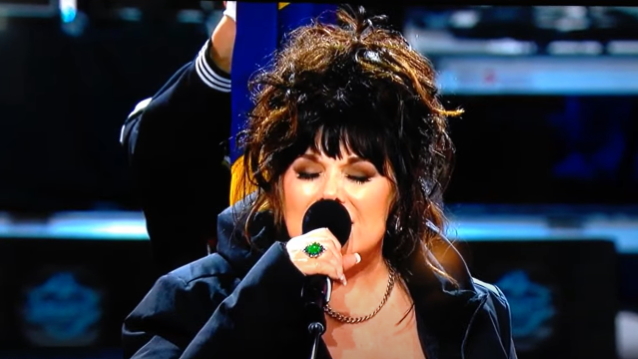 Rock And Roll Hall Of Fame inductee and lead singer of legendary rock band HEART, Ann Wilson, sang the U.S. national anthem at festivities at the Draft Theater in Cleveland on Thursday, April 29, as part of the NFL Draft Concert Series presented by Bose. Grammy Award winners KINGS OF LEON performed as part of the Draft opening festivities. Their full performance was streamed on NFL.com, in the NFL app and live on the NFL's Facebook page. Portions of the performance were also televised in NFL Network, ESPN and ABC's pre-Draft coverage beginning.

Video of Wilson's rendition of the anthem is available below.

A few days ago, Ann said in an interview that there are no plans for HEART to work on new music in the immediate future.

A couple of weeks earlier, Ann released another new single, "Black Wing". It is one of several songs the HEART frontwoman recorded last fall in Seattle with the help of local musicians, including current HEART bassist Andy Stoller and keyboardist Dan Walker. In addition to "Black Wing", Wilson recorded "Tender Heart" as well as covers of Steve Earle's "The Revolution Starts Now" and ALICE IN CHAINS' "Rooster", all three of which have already been released as singles, plus another original, "The Hammer", which came out in February.