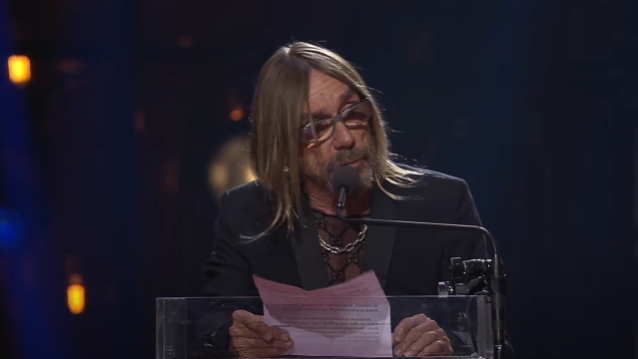 On Tuesday (May 24),legendary rocker Iggy Pop was presented with the 2022 Polar Music Prize at a ceremony in Stockholm.

The Polar Music Prize was founded in 1989 by Stig "Stikkan" Anderson, the manager and music publisher of ABBA. A well-known lyricist, he also was the co-writer on many of their early hits. The prize was first presented in 1992.

In accepting his award, Iggy Pop commented: "Recognition is a hard mistress … Ada Osterberg, a Swedish émigré to the U.S., adopted my father James… [Ada] was a Red Cross nurse and raised my dad during the great depression… These were great people, real people. I am neither great nor real. At this point, I am a myth. Happily, music is a form of myth. All beauty derives from believing in myth. But every so often, you gotta get real — like balls. That's how I got here. So when you think about music, when you think about this prize and if you remember me, think about the balls."

In a statement announcing Iggy's award, the Polar Music Prize award committee said: "With his era-defining group THE STOOGES, Iggy Pop created furious rock music by blending together blues and free jazz influences with the roar of the Michigan automotive industry. With his courage, initiative and raw power, Iggy Pop paved the way for punk and post-punk. Groups like the SEX PISTOLS, RAMONES, BLONDIE, SIOUXSIE AND THE BANSHEES, JOY DIVISION and Nick Cave all followed in his footsteps. As a solo artist, Iggy Pop has never slowed down, and has instead pushed this art form forwards for half a century. Iggy Pop is 'the chairman of the bored' who portrays alienation in poetic language. A wholly unique artist who personifies and embodies what rock music is about."

Since his raucous proto-punk, peanut butter smearing days with THE STOOGES, few "street walking cheetahs" have mastered the maniacal with as much grit, gusto and flair as Iggy Pop.

The Polar Music Prize honors two laureates every year to "celebrate music in all its various forms" and "to break down musical boundaries by bringing together people from all the different worlds of music." It awards each laureate one million kronor (approximately $125,000) at a gala in Stockholm.

This year's ceremony took place at The Grand Hotel in Stockholm, Sweden.