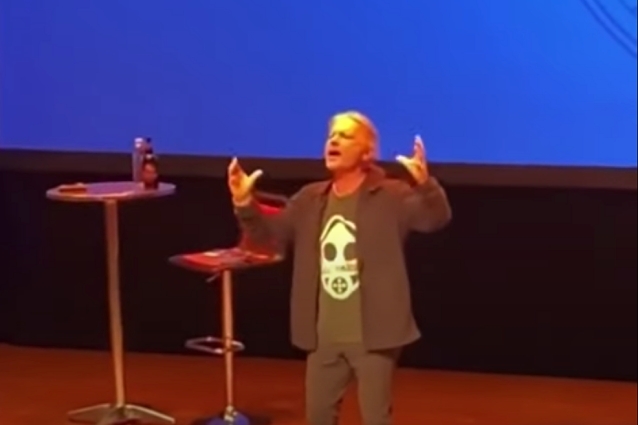 Fan-filmed video footage of Bruce Dickinson belting out an a cappella version of "Tears Of The Dragon", the first single from his second solo album, 1994's "Balls To Picasso", during his August 7 spoken-word show in Nottingham, U.K. can be seen below.

Earlier this week, the IRON MAIDEN singer confirmed that he had tested positive for COVID-19 after being vaccinated.

Dickinson received a positive diagnosis just days after he abruptly postponed the last two dates of his U.K. spoken-word tour because a member of his immediate household contracted the disease caused by the novel coronavirus.

Bruce told Rolling Stone he took a lateral-flow COVID test after he started feeling like he was getting a cold, and it came back positive. "I thought, 'Oh well, shit,'" he said. "I was kind of sneezing a bit. For a couple of days, I felt a bit groggy, kind of like the flu, and that was it. And I'm 63 years old. I've pretty much got no doubt that had I not had the vaccine, I could be in serious trouble."

IRON MAIDEN's new album, "Senjutsu", will be released on September 3 via BMG. It was recorded in Paris with longstanding producer Kevin Shirley and co-produced by bassist Steve Harris.

The video for the LP's first single, "The Writing On The Wall", was made by BlinkInk based on a concept by Dickinson with two former Pixar executives. It followed a month-long teaser campaign and global "treasure hunt" for clues about the track title and concept.