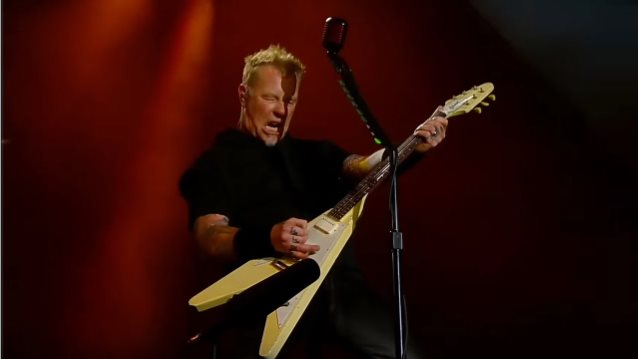 METALLICA's James Hetfield can be seen playing the GHOST song "Cirice" in a new video.

The footage, which can be seen below, was filmed at METALLICA's headquarters in San Rafael, California and shows the guitarist/vocalist playing the opening riff from the track, which originally appeared on GHOST's 2015 album "Meliora".

Back in 2011, James told Sweden's SVT that he was "in [GHOST's] fan club." He added: "I had no idea what they looked like until I saw the video. I heard the music first and I thought it was very great very unique, very melodic and a breath of fresh air for metal. It reminded me a bit of '70s kind of rock that I liked as well. So yeah, I love the band."

GHOST lead singer and founder Tobias Forge told BBC Radio 1's "Rock Show With Daniel P. Carter" that some of his "first really big shows" were seeing METALLICA." He added: "That also set a standard. So now, being mentored by [them] and being close to them and close to their crew and watching that operation, it's, for me, very, very inspiring, and I'm happy that I have the luxury of seeing that. METALLICA was also one of my brother's favorite bands, so there's definitely moments where — because he passed away, basically, just before GHOST happened — so there's definitely moments there where it's… You have that feeling of, 'Look at this. I'm here watching this. Being asked to… I just played on this stage now. There's James Hetfield playing that song.'"

GHOST's new album, "Prequelle" will be released on June 1 via Loma Vista Recordings.