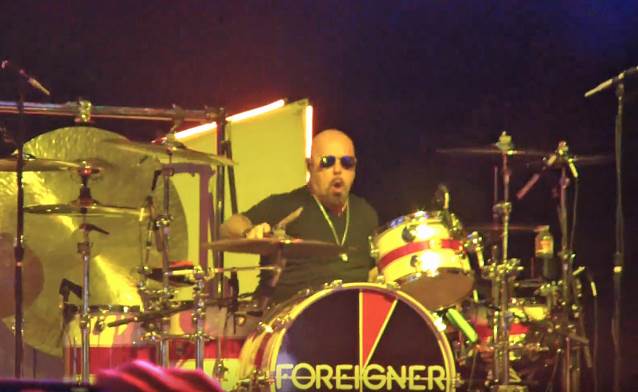 Drummer Jason Bonham rejoined his former bandmates in FOREIGNER on stage this past Wednesday, August 1 at the FivePoint Amphitheatre in Irvine, California to perform the group's classic song "Hot Blooded". Fan-filmed video footage of his appearance can be seen below.

Following his participation in the monumental reunion of LED ZEPPELIN at London's O2 arena in 2007, Jason Bonham decided to take the music his father was such a huge part of out on the road. The result became JASON BONHAM'S LED ZEPPELIN EVENING. Best described as a band that perfectly recreates the music of Robert Plant, Jimmy Page, John Paul Jones and John Bonham, JASON BONHAM'S LED ZEPPELIN EVENING not only celebrates one of music’s most iconic bands but also the life of Bonham's late father, who died in 1980.

When asked why he decided to start the project, Jason said: "It was medicine to relieve myself from the amount of LED ZEPPELIN that I had studied and rehearsed prior to the O2 show and then dealing with the realization that it wasn't going to go anywhere beyond that one concert. It originally began as me just wanting to put together a show, but once I realized I could make it more than just the music, it became something more. It gave me the opportunity to give a little nod to what everyone knows about my dad's wild side but also show his sensitive side as well. For me, he was always dad at home and this was an idea to show a deeper side of that."