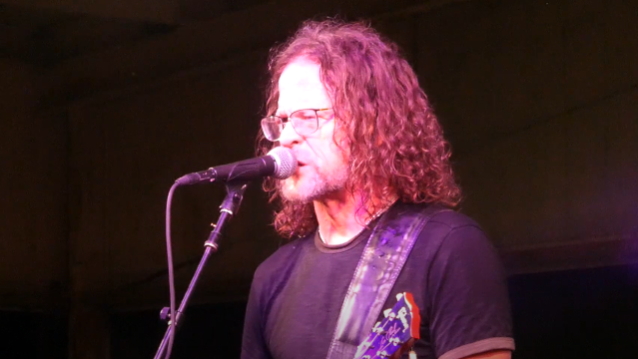 Former METALLICA bassist Jason Newsted and his CHOPHOUSE BAND headlined the village volunteer fire department's annual Field Days this past Saturday, September 3 at Austin Park in Skaneateles, New York. Video of his appearance can be seen below.

Newsted, who bought and moved into a $6 million home on Skaneateles Lake in 2020, previously performed at last year's Field Days as a guest of MERE MORTALS.

This past April, Newsted told the 98.7 The Gater radio station that he was "not playing any acoustic guitar" with THE CHOPHOUSE BAND "anymore — it's just Les Pauls and SGs and stuff now. Some of it's a little quieter but most of it's not," he said.

Adding that he "loves" singing, Newsted said: "Now since the last time anybody saw THE CHOPHOUSE BAND, we have a vocal group within the band. Now there are four singers in the band. So I can actually really concentrate on playing the guitar and then singing that background stuff. And there's screaming and some [growling] also. So I still haven't lost that. And it lets people know that there's still one foot in that place. You can take the boy out of the metal [but] you can't take the metal out of the boy; it's just the way it's always gonna be. So I'm excited for people to be able to witness what we have been working so hard at. I put a lot — a lot — of energy into these new songs."

Newsted also revealed that THE CHOPHOUSE BAND was planning to enter the studio to begin recording its debut album. Asked if he would release the LP himself, Jason replied "yes" before clarifying, "Actually, it's possible — very possible — that I'll be back into the Q Prime fold [METALLICA's longtime management company] with that kind of backing, like a real-deal thing."

Jason previously told the Palm Beach Florida Weekly about THE CHOPHOUSE BAND: "We all get along great because there's not money involved. They've got their own bands, their own families, their own gigs. We do benefit gigs, six a year, and that's it. I record and write and play songs the whole rest of the time. They could all run circles around me musical theory-wise. They could tell you everything they're playing, and all the relating chords. I surround myself with the badasses, and they make me look really good. I'm playing cowboy chords the whole time, and they're doing their fancy shit to make me look good. I just concentrate on singing, and getting across the things I want people to hear."

Jason Newsted has taken the stage, c’mon down!

Tonight!! Get here early! And pay-one-price rides from 7-10!