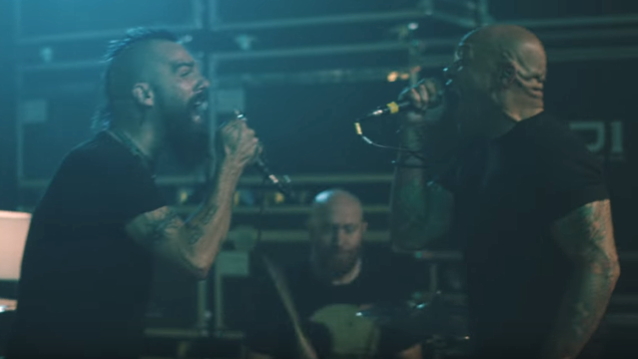 "The Signal Fire", the new music video from Massachusetts metallers KILLSWITCH ENGAGE, can be seen below. The song, which features a guest appearance by former KILLSWITCH ENGAGE singer Howard Jones, is taken from the band's new album, "Atonement", which was released on August 16 via Metal Blade Records in the U.S. and Sony Music Entertainment in the rest of the world. The electrifying performance clip was directed by the band's longtime collaborator Ian McFarland ("The Godfathers Of Hardcore", MESHUGGAH).

"This video is a demonstration of solidarity and unity," says KILLSWITCH ENGAGE singer Jesse Leach. "This is for the fans and this is our testimony to all who see this video. In these times we live in, I believe this is an important message — not just for us as a band and our fans but for all of humanity. This is a call for compassion and understanding! There is strength in unity."

Leach continues: "The making of the video was a great experience as well. Just all of us guys hanging out and having fun together. Ian McFarland did a hell of a job capturing the vibe and energy of our performances."

"It was another silly day at the office," adds Jones. "Good food, lots of wrestling talk, and hanging with the boys is a great way to spend the day and get a little work done. Shoutout to Ian McFarland for making everything painless at the shoot. The day was all smiles — with a hint of metal."

Leach said that he wrote "The Signal Fire" lyrics "with Howard in mind and our connection through our similar mental illnesses." He explained: "I mean, now that I've hung with this guy a few times, it's 'crazy' (pun intended) how similar we are. We are brothers in metal, anxiety, hardcore music, love of medicinal marijuana and fighting depression.

"Atonement" features an additional guest appearance by TESTAMENT frontman Chuck Billy. It marks the band's third full-length release since the return of Leach, who rejoined the group in 2012.

Leach recently said that he "wouldn't change a thing" about the follow-up to 2016's "Incarnate". "At first, I was a bit crestfallen that a few songs I truly loved didn't make the cut," he wrote on Instagram. "Now after time has passed (and I've not listened to it for a while),I listened with fresh ears today. I gotta say I am quite satisfied! The messages, the tones, the track listing order, the artwork, the overall feel of this album, it just feels fresh!

"I feel there is something for everyone on this one. It captures the wide range of styles and topics that are part of our history as a band as well as pushing things just a touch. It is a pretty amazing feeling as a very picky and perpetually unsatisfied (and fairly insecure) artist to feel accomplished."

Leach appeared on KILLSWITCH's self-titled debut and sophomore album, "Alive Or Just Breathing", before exiting the band. Jones took over on vocals for "The End Of Heartache", "As Daylight Dies" and the 2009 self-titled set before being dismissed from the group seven years ago.