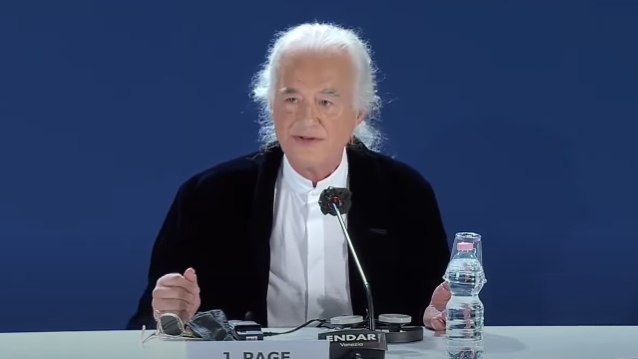 MacMahon said in a press release: "With 'Becoming Led Zeppelin' my goal was to make a documentary that looks and feels like a musical. I wanted to weave together the four diverse stories of the band members before and after they formed their group with large sections of their story advanced using only music and imagery and to contextualize the music with the locations where it was created and the world events that inspired it. I used only original prints and negatives, with over 70,000 frames of footage manually restored, and devised fantasia sequences, inspired by 'Singin' In The Rain', layering unseen performance footage with montages of posters, tickets and travel to create a visual sense of the freneticism of their early career."

"Becoming Led Zeppelin" features new interviews with Page, singer Robert Plant and bassist John Paul Jones, as well as rare archival interviews with the late drummer John Bonham. It marks the first time members of LED ZEPPELIN have participated in a documentary about the group.

MacMahon previously directed the Emmy-nominated music documentary series "American Epic" about the early American roots music recordings of the 1920s. Page praised the film back in 2019, saying: "When I saw everything Bernard had done both visually and sonically on the remarkable achievement that is 'American Epic', I knew he would be qualified to tell our story."

Plant added: "Seeing Will Shade and so many other important early American musicians brought to life on the big screen in 'American Epic' inspired me to contribute to a very interesting and exciting story."

Jones stated: "The time was right for us to tell our own story for the first time in our own words, and I think that this film will really bring this story to life."