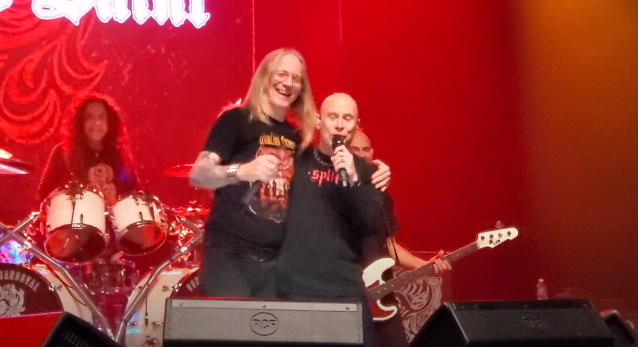 Watch: JOHN BUSH Rejoins ARMORED SAINT On Stage After Sitting Out Shows Due To Respiratory Infection

ARMORED SAINT frontman John Bush rejoined his bandmates on stage last night (Saturday, November 19) at Penn's Peak in Jim Thorpe, Pennsylvania. It was his first full show back with the group after dealing with a bad respiratory infection for several days.

Bush missed three shows on ARMORED SAINT's U.S. trek with W.A.S.P. and was temporarily replaced by Jason McMaster (DANGEROUS TOYS, BROKEN TEETH). McMaster previously stepped in for ACCEPT's Mark Tornillo when the latter vocalist got sick and was unable to play a couple of the dates on the legendary German/American metal band's recent U.S. tour.

At Friday's (November 18) show at The Paramount in Huntington, New York, Bush joined McMaster and the rest of ARMORED SAINT on stage for the final two songs of the band's set, "Can You Deliver" and "Mad House".

Fan-filmed video of the Huntington and Jim Thorpe performances can be seen below.

ARMORED SAINT kicked off its long-awaited fall 2022 U.S. tour supporting W.A.S.P. on October 28 in Las Vegas, Nevada. The trek will run through December 11 in Los Angeles, California. Additional support is being provided by MICHAEL SCHENKER GROUP on select shows.

ARMORED SAINT released the "Symbol Of Salvation Live" CD/DVD last fall via Metal Blade Records. The release came in celebration of the seminal album's 30th anniversary. "Symbol Of Salvation Live" was a combination live album and video of the band playing the album in its entirety at New York City's famed Gramercy Theatre during its 2018 tour. It captures the power, diversity, and peerless songwriting contained within.

ARMORED SAINT's long-awaited documentary, Armored Saint: Band Of Brothers", will be made available "soon" via "select theaters and streaming outlets." Produced and directed by Russell Cherrington, the film tells the story of ARMORED SAINT, a band of brothers that created its own unique sound and image in the 1980s Los Angeles rock and metal scene.