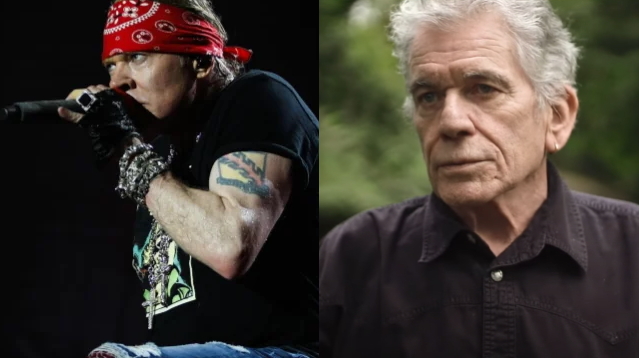 Axl Rose has paid tribute to NAZARETH singer Dan McCafferty, who died earlier this month at the age of 76.

The GUNS N' ROSES frontman took to his Twitter on Saturday (November 19) to write: "Haven't addressed this... been a tough pill to swallow. Very, very sad to learn of the passing of Dan McCafferty of NAZARETH. I learned a day or so after, right before a show. Was in a bit of a surreal headspace on stage for several songs. Went on a NAZARETH binge for a few days.

"Thanks Dan n' all of NAZARETH for all the music over the years. Their music n' Dan's voice will always have a special place in my heart. Rest in peace Dan."

NAZARETH bassist and co-founder Pete Agnew later told The Metal Voice: "They would have liked Dan to do it, but we were touring. It just wasn't possible. He would have [gone]. Dan would have [gone] along and sung. I think possibly the song outlasted the marriage. In the early days, GUNS N' ROSES used to come and see us, before they were huge."

In 1988, Axl said onstage: "If it wasn't for Dan McCafferty and NAZARETH, I wouldn't be singing. I used to lock myself in the bathroom and try to hit those notes in 'Love Hurts', ya know?"

After McCafferty's decision to step away from NAZARETH, the band continued to tour and record under the leadership of sole remaining founder member Agnew, with McCafferty's blessing.

McCafferty stated about his retirement from NAZARETH: "If you can't do the job, you shouldn't be there. NAZARETH's too big for that."