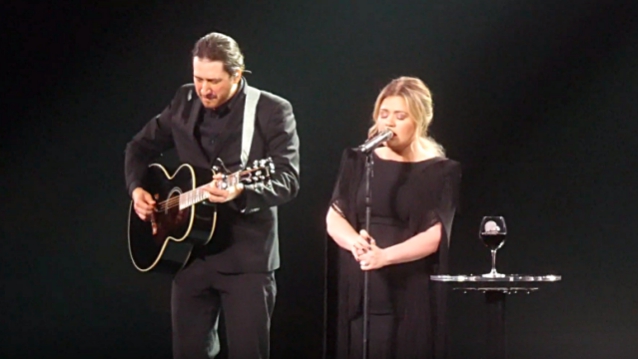 Fan-filmed video footage of pop singer Kelly Clarkson performing a cover version of the AEROSMITH classic "I Don't Want To Miss A Thing" on March 16 at the Royal Farms Arena in Baltimore, Maryland during her "Meaning Of Life" tour can be seen below (courtesy of YouTube user "Steve Easton").

Although "I Don't Want To Miss A Thing" is by far and away AEROSMITH's biggest hit, it was not written with the band in mind. Diane Warren, who is one of the most successful songwriters of the past three decades, told the Wilkes Barre Times-Leader that she was asked to write a song for the movie "Armageddon" and — believe it or not — it was largely inspired by Barbra Streisand and James Brolin.

Warren explained how the song evolved after she saw an advance screening of "Armageddon": "I saw some of the scenes, especially in the end where Bruce Willis's character dies. It was very touching. So I wrote 'I Don't Want To Miss A Thing'. I'd had the idea because I heard something that James Brolin said about Barbra Streisand, that he didn't want to go to sleep because he'd miss her. I kept that idea in my mind."

In a 2002 interview with Classic Rock magazine, AEROSMITH guitarist Joe Perry gave his thoughts on having someone else's song become the band's biggest hit. "At the time, we just didn't have the time to settle down and [write a song for the movie]," he said. "We were out on the road, so they brought us in to see the movie and said, 'Here's the song. This is where it fits into the movie. You can do it if you want.' So we were in the studio within the next three days cutting it. And, yeah, we do wish that we'd had a little more time, so that we could have had a shot at writing it, but it was perfect timing. The song was great, people loved it, and I don't think people care that much who wrote it."

"I kind of knew it was a hit, but I didn't really like the song," he admitted. "I didn't think that song was us. When I first heard it, it was just a demo with piano and singing. It was difficult to imagine what kind of touch AEROSMITH could put on it and make it our own. When we finally did make it our own, that's when it became what it is. It was just a question of learning the song and playing it as a band. As soon as we began playing it as a band, then it instantly became an AEROSMITH song."