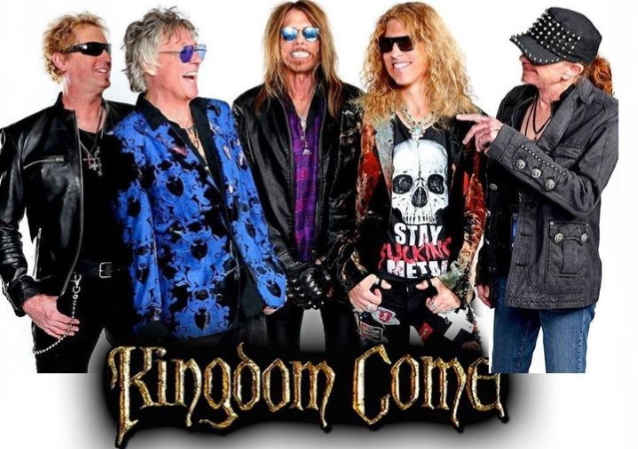 Singer Lenny Wolf is not involved with KINGDOM COME's current reunion tour, which recently celebrated the 30th anniversary of the release of the band's self-titled debut album.

The trek, which kicked off in September 2018, features drummer James Kottak alongside guitarists Danny Stag and Rick Steier, bassist Johnny B. Frank and vocalist Keith St. John (formerly of MONTROSE and LYNCH MOB).

KINGDOM COME will perform at this year's edition of the Sweden Rock Festival, set to take place June 3-6 in Sölvesborg, Sweden.

In a May 2019 interview with "Talking Metal", Kottak was asked about KINGDOM COME's future plans as it relates to touring and recording. He responded: "2020 is shaping up to be a really busy year for us. We're gonna play, basically, every weekend. And of course, we wanna do new music. Contractually, we have to wait two years. And it's the nature of the beast and the way it is. But, again, we respect Lenny and what he's decided to do.

"Rick has enough music — I'm not kidding — riffs and stuff for, like, 10 albums; he's a songwriting machine," he continued. "And we're gonna see what happens. We're just taking it month to month, day by day — one day at a time."

During the same chat, Steier talked about KINGDOM COME's decision to play without Lenny, saying: "Lenny retired. It's something that he wanted to do. He wasn't into going and performing anymore. So God bless him, and we wish him all the best. But we still have some rocking blood in us. So we wanna get out there.

"We did a couple of months run [in the fall of 2018], and then [now] we're doing weekend warrior stuff, getting the name back out, making sure people remember us playing and showing people we still can play," he said. "'Cause a lot of bands get worse as they get older."

Back in 2018, Kottak admitted that he and his bandmates were initially concerned about whether people would accept KINGDOM COME without Wolf.

"When we first put the word out to promoters and buyers, at first they were going, 'Oh yeah! KINGDOM COME!'" the drummer recalled to Eonmusic. "Then we had to go back a few weeks later and say, 'Sorry. Unfortunately, there will be no Lenny Wolf.' So, out of the 20 or so offers we had from different buyers, only three actually pulled out. I was surprised; I thought we'd get a little more backlash. But so many bands, especially bands with longevity, they change members; look at THIN LIZZY, how they changed, or name any band that's been around for 25, 30 years, and there's very few that have all the original members."