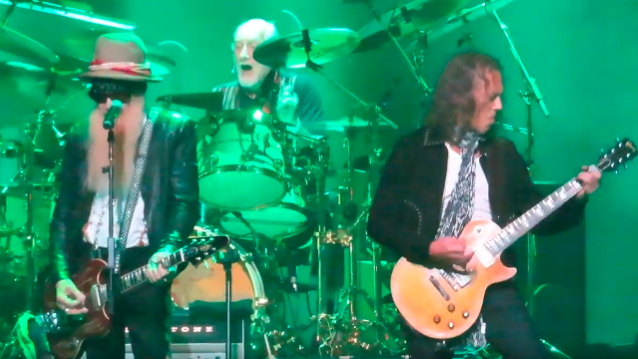 Fleetwood said about the show: "The concert is a celebration of those early blues days where we all began, and it's important to recognize the profound impact Peter and the early FLEETWOOD MAC had on the world of music. Peter was my greatest mentor and it gives me such joy to pay tribute to his incredible talent. I am honored to be sharing the stage with some of the many artists Peter has inspired over the years and who share my great respect for this remarkable musician."

Fan-filmed video footage of the concert, including Tyler and Gibbons teaming for "Oh Well" and Hammett playing "The Green Manalishi (WIth The Two Prong Crown)", can be seen below.

The concert took place just a few weeks after it was announced that Hammett is collaborating with Green on a book and music project for Rufus Publications. Hammett was at Abbey Road Studios in London last month to record "something very special" for the project, which will feature guest appearances by several other artists. In addition, Hammett has posted a couple of photographs with Green, including one image where Peter can be seen holding a vinyl copy of METALLICA's "Master Of Puppets" album and another where they are both holding Green's legendary 1959 Les Paul guitar — known as "Greeny" — which Hammett now owns.

Prior to the event, Hammett made a blog post on his FearFestevil.com web site in which he wrote: "I'm honored to be playing a part in the Peter Green Celebration Show being staged by Mick Fleetwood at the London Palladium. Between Mick, Billy Gibbons and Dave Gilmour I am going to be in the presence of some severe legends, and in truth, I'm completely blown away by that.

"When I acquired Greenie, I bought her because she sounded great. She's a very unique sounding guitar. I had no idea it would lead to all these different opportunities, all these different experiences, and meeting all these different people. It was coming up on 50 years since Peter Green left FLEETWOOD MAC, this tribute was happening, but no one called me until Ross Halfin called Mick Fleetwood's manager and kind of informed him about my owning the guitar and suggested I should be part of it. So Mick Fleetwood got a hold of me at the beginning of the 'Hardwired…' tour and asked if I was interested in doing this tribute to Peter Green. At the time I had to tell him I had no idea what my schedule was gonna be like with METALLICA because we were literally on the eve of our first shows for 'Hardwired…' But then three years passed and the tribute show started to develop more. Ross had kept me abreast on how it was taking shape, so I contacted Mick Fleetwood, and he was gracious enough to say I could still be part of it. So that's how I'll get to play 'Green Manalishi' at the Peter Green tribute!

"It's just amazing, seeing and hearing all the people committed to the tribute. The majority of them are all people I've been well aware of ever since I was a young musician, so to be playing with some of them now, it's a mind blower … A Mind Blower !!"