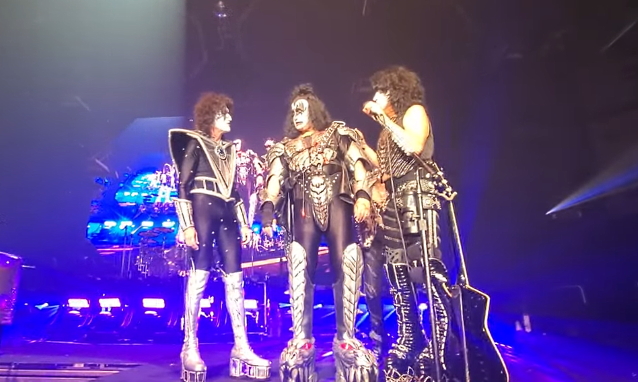 Gene Simmons celebrated his 72nd birthday last night (Wednesday, August 25) during KISS's concert at the Huntington Center in Toledo, Ohio as part of the group's "End Of The Road" world tour.

Video footage of the Toledo crowd, as well as Gene's KISS bandmates, singing happy birthday to him can be seen below.

KISS frontman Paul Stanley also wished Gene a happy birthday on Twitter. Paul shared an early photo of the pair, and he wrote in an accompanying message: "HAPPY BIRTHDAY GENE! We started as partners but all the years made us brothers. You're a good man and a GREAT Demon! In it to the end. Paul".

Earlier this year, Stanley spoke to the St. Louis, Missouri radio station KSHE 95 about his continued partnership with Simmons — this despite their seeming like extremely different types of people. He said: "He's my brother. His family is my family. I think of Shannon, his wife, as my sister-in-law. We've never been closer than we are now. We've come so far and done so many great things for each other, it would be ungrateful if we were anything less. We're there to cheer each other on and text each other. We're more than good."

In July 2020, Stanley admitted to "Live From Nerdville With Joe Bonamassa" that he "didn't particularly like" Simmons the first time they met. "But there was pragmatism involved," he said. "You have to prioritize and figure what's most important to you to reach your goal. And I knew that Gene and I were much stronger together than me alone. I'm not really sure that he knew that, but that became irrelevant. It was, 'How do I get where I wanna go? How do I achieve what I want?' And Gene was essential to it. And here we are 50-plus years later. It's astounding. We've created something that seems like it will outlast us."

HAPPY BIRTHDAY GENE! We started as partners but all the years made us brothers. You’re a good man and a GREAT Demon! In it to the end. Paul pic.twitter.com/3t0ixioiSD