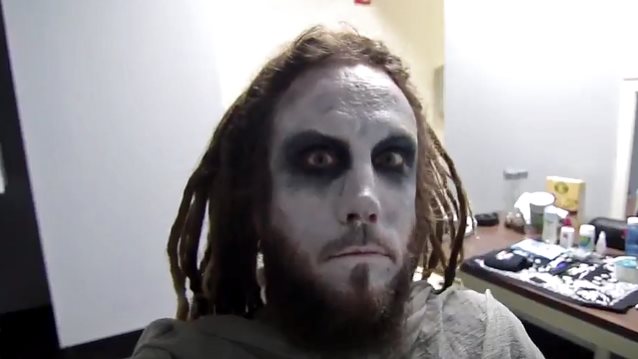 KORN guitarist Brian "Head" Welch joined BABYMETAL on stage — his face painted in the same white-and-black makeup as the Japanese act's backing band — on June 25 at the Ford Idaho Center in Nampa, Idaho. Official video footage from KORN, as well as a couple of fan-filmed clips, of the collaboration can be seen below.

BABYMETAL was one of the support acts on KORN's "The Serenity Of Summer" tour, also featuring STONE SOUR, YELAWOLF and ISLANDER.

KORN's latest album, "The Serenity Of Suffering", came out at the end of October. The track "A Different World" features a guest appearance from SLIPKNOT and STONE SOUR frontman Corey Taylor.

The Japanese pop-metal sensation made its U.S. late-night TV debut on "The Late Show With Stephen Colbert" in April 2016, performing "Gimme Chocolate" off their debut album.