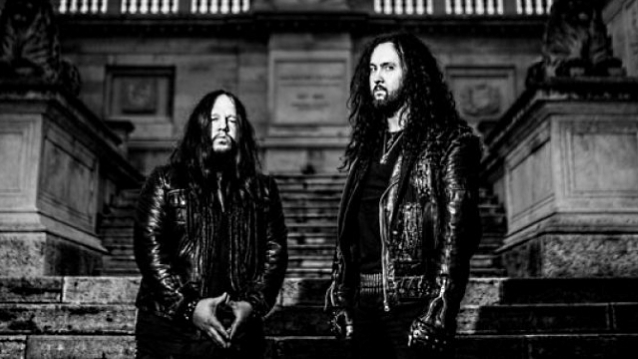 JOEY JORDISON's SINSAENUM Bandmate Says It's Not His 'Place' To Reveal Drummer's Cause Of Death: 'It's Just Very Sad'

Two months ago, Joey Jordison's SINSAENUM bandmate Frédéric Leclercq spoke to the Impact metal channel about the passing of the founding SLIPKNOT drummer. In the chat, which has just now been uploaded to YouTube, he was asked if he knew what caused Joey's death, Leclercq said (as transcribed by BLABBERMOUTH.NET): "That's not my place to discuss. Of course I know. I'm just saying it's not my position. The family asked for privacy at that time, and I respect that. It's just very sad."

Asked how he would summarize Jordison's legacy, Frédéric, a former member of DRAGONFORCE who now plays bass in KREATOR, said: "To me, he was more than a musician. To me, he was first and foremost a friend. So I lost a friend that was only 46 years old, and it hurts. He was an amazing musician, not only on drums but also he wrote amazing songs. And we were lucky enough to play together. It was great.

"I created SINSAENUM," he continued. "He contacted me. We were looking for a drummer. Everything just fell into place. He came up with the name [a combination of the words 'sin' and 'insane'). The last shows he played were with us; that's the last thing that he played.

"I have a column in a Japanese magazine called Young Guitar, and I was doing yesterday, typing, and I just remembered the last song that he played ever was [SINSAENUM's] 'My Swan Song', and I guess the title is… And that's a song that he really loved. I remember he was just, like, 'Yeah.' He felt something about it. So it's a little strange to think about it now. So I've been listening to the song again and again.

Joey's family confirmed that he died "peacefully in his sleep" on July 26 of an unspecified cause.

A few days after Jordison's passing, Leclercq blasted TMZ for sharing the audio of the 911 call placed by the former SLIPKNOT drummer's ex-girlfriend after she found him dead. On July 29, the tabloid site posted the two-and-a-half-minute phone call in which the ex-girlfriend — who continued taking care of Joey's bills and maintaining his house in Iowa even after their split — could be heard getting very emotional when she went to his home to check on him after he hadn't returned her messages. During the call, she indicated that Joey was "a really bad alcoholic" with "health issues," and she revealed that the motion sensors on the house hadn't detected any activity in days.

Last month, SLIPKNOT frontman Corey Taylor called Jordison's death "a damn tragedy. "He was way too young, and he was way too talented to lose him like this," Corey added in an interview with SiriusXM's "Trunk Nation With Eddie Trunk". "I know a lot of people wonder about the circumstances that led to him not being in the band anymore, and it's, like, we're not gonna talk about that, because I'd rather talk about his legacy, which is that he helped create this band that we all have fought to keep out there and keep going. Just the fact that he's not here now, it's still — I still can't believe it," Corey said.