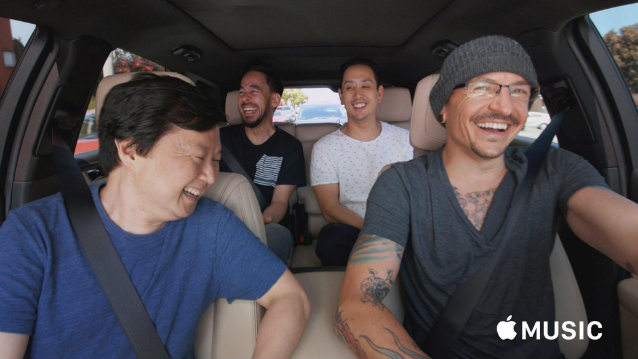 The "Carpool Karaoke: The Series" episode featuring LINKIN PARK has been posted on the band's Facebook and can be seen below.

After Bennington's death six days later, Jeong paid tribute to the singer on Twitter, writing, "I am in shock and heartbroken. All my thoughts and prayers go out to Chester and his family and friends at this time."

Corden said in August the Apple Music show would "approach it in whichever manner his family, or the people [who] were involved in that episode, would like it to be handled.

"We will navigate it as delicately as possible and just adhere to whatever wishes they would want because I don't think there's any other way we could deal with it," he added. "It's a tragedy."

Other celebrities that have appeared on the program include John Legend and Alicia Keys, Billy Eichner and METALLICA, and Queen Latifah and Jada Pinkett Smith.