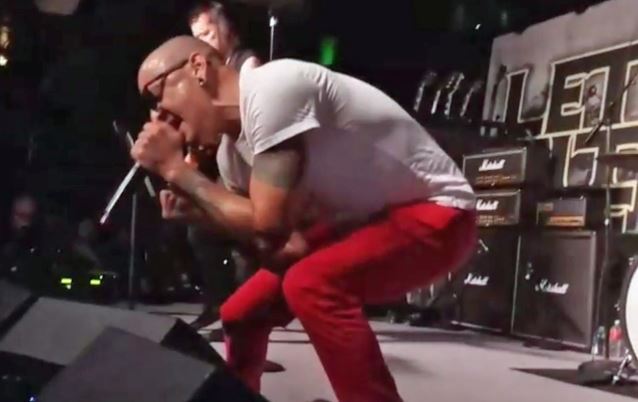 Chester Bennington (LINKIN PARK, STONE TEMPLE PILOTS),Robin Finck (NINE INCH NAILS),Rob "Blasko" Nicholson (OZZY OSBOURNE),Joey Castillo (QUEENS OF THE STONE AGE),Gilby Clarke (GUNS N' ROSES) and Franky Perez (APOCALYPTICA) are among the musicians who performed with THE HELLCAT SAINTS, the band created by VELVET REVOLVER guitarist Dave Kushner, on Tuesday, June 14 at the Conga Room in Los Angeles, California as part of GungHo Online's concert/party for the action-horror game "Let It Die" during E3. Among the tracks that were played were "Down" (STONE TEMPLE PILOTS),"Them Bones" (ALICE IN CHAINS),"Paradise City" (GUNS N’ ROSES),"Hole In The Sky" (BLACK SABBATH) and "Ace Of Spades" (MOTÖRHEAD). Fan-filmed video footage of the event can be seen below.

Bennington exited STONE TEMPLE PILOTS in 2015 to focus on his other band, LINKIN PARK.

Chester joined STONE TEMPLE PILOTS in 2013, shortly after they fired Scott Weiland. He recorded one EP with the band, "High Rise", and did a handful of tours.

LINKIN PARK has been mostly out of the public eye since an early 2015 tour in support of its latest album, "The Hunting Party", was scrapped when Bennington injured his foot.

The band is working on its seventh album at a Los Angeles studio for a tentative early 2017 release.