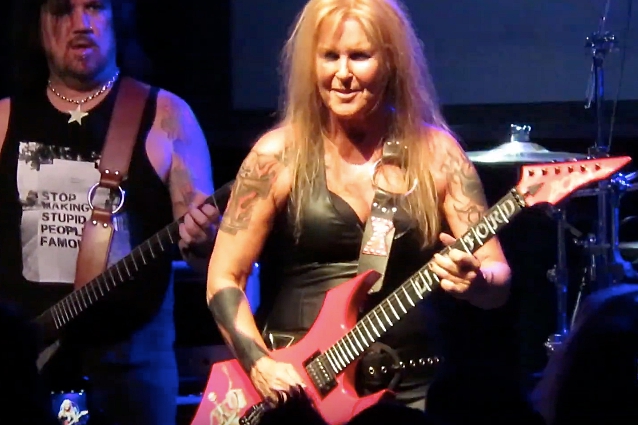 Video footage of Lita Ford's May 26 performance at Buffalo Rose in Golden, Colorado can be seen below (courtesy of Decibel Geek TV's Rockin' Ron).

Earlier this year, Lita Ford told The Metal Voice that she was putting the finishing touches on the follow-up to 2012's "Living Like A Runaway" album. Helming the new project once again is guitarist/producer Gary Hoey, who contributes some guitar playing to the disc, alongside the rest of Ford's backing band, which continues to consist of guitarist Patrick Kennison, drummer Bobby Rock and bassist Marty O'Brien.

"It's a concept album," Lita said. "We have to keep the songs consistent so they all work together."

Although Ford declined to reveal the specifics of the concept, she confirmed that the LP will include a song called "Monsters", which was inspired by infamous cult leaders like Charles Manson and David Koresh. "It's just really dark and nasty stuff — brainwashing people and all the stuff [Koresh] did, and got all those people to drink Kool-Aid. But then again, it could be someone like your attorney, or it could be someone like your mom who is the monster in your life. It could be your manager. You never know who the monster in your life is gonna turn out to be."

Describing the music on her new disc as "dark and riffy," Lita said that she is "very excited about it." She added: "It's got a cool feel. It's all done and written and exciting. It'll be out really soon — really soon. We just have to put pen to paper to a new record deal, and then we can tell [everybody more about it]."

Last year, Ford told KBACK Radio that she "was going through a real hard time in my life" during the making of "Living Like A Runaway", "and music was my outlet. I dumped everything into my music, because I didn't wanna start drinking or doing drugs or hurting myself in any other way, so I just rocked out — I put everything into my music, and it really shows in the songs and the lyrics of that album," she said. "They are true — it's a true story, that entire album. But the next album that we're doing is something that I've had in the can for quite a while and it's resurfaced in my life and I'm carrying on with it and I'm making it come to life, and it's really awesome. I don't wanna give it away yet, but I think people are going to be happy with it. It's very riffy, very memorable choruses — stuff that sticks in your head with the riffs and the choruses, the melodies. A real cocky attitude. I love it. I'm very happy with it."

Three years ago, Lita released an autobiography, "Living Like A Runaway: A Memoir", via Dey Street Books (formerly It Books),an imprint of HarperCollins Publishers.