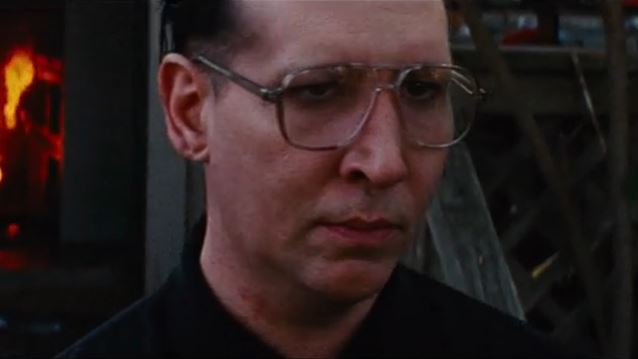 Marilyn Manson is featured in a trailer for the new film "Let Me Make You A Martyr", which will premiere at Fantasia Film Festival in Montreal next month. The crime movie about an abusive father reunites "Sons Of Anarchy"'s Mark Boone Junior with the shock rocker and erstwhile "Sons" actor, who plays a Native American hit man named Pope.

Manson told Rolling Stone about the reunion with Boone: "Mark brought me into the project. We were friends from 'Sons Of Anarchy'. He's sort of my unwanted mentor. He tells me what to do. He's always encouraged me, but he's very bossy about it. He says things like, 'You gotta do this, motherfucker. You'll like this.'"

Manson was excited about "Let Me Make You A Martyr". "It was the biggest role that I've played," he said. "On the script, I'd say I was on half of the pages. I don't know how the movie will end up though."

The role won't be Manson's first foray into movies. He has also appeared in films like "Lost Highway", "Party Monster" and "Jawbreaker". In addition, he has a diverse line of television credits on his acting resume, having popped up on "Once Upon A Time" as the voice of Shadow, a more nefarious version of the mischievous character from the classic Peter Pan stories. Manson's other small screen exploits include turns on "Eastbound And Down" and "Californication".