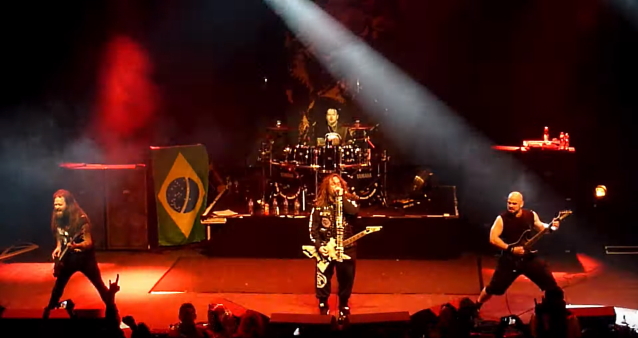 Fan-filmed video footage of Max Cavalera and his brother Igor performing material from the SEPULTURA albums "Arise" and "Beneath The Remains", among other classics, on December 11 at the Kentish Town 02 Forum in London, England can be seen below.

In a 2018 interview with Wall Of Sound, Max stated about revisiting the "Beneath The Remains" and "Arise" material on the current run of shows: "I had to learn those riffs again for the tour, and I had to rediscover the albums again. It was a really fun process, learning the lyrics again. I kind of fell in love with the albums again. I don't have a favorite — I like both together, and I think they're meant to be together. For some reason, they just feel right when you play them together. I was very young when I made them, so it made me very aware of my state of mind at the time. I feel like I'm pretty much the same guy. I'm [50] now, but I'm still a metalhead in the heart. I still have the teenage spirit. I'm a huge metal fan, [a] huge supporter of metal. That's just how it was when those albums were done. It's a blessing that I get to do that with my brother, especially after all we went through together and we didn't speak for 10 years. Now, it's good — we are in a good place, and our brotherhood is really good, and we're just having fun with this music... There's an energy and a real anger and real passion in those songs that translates into people losing their minds when they hear it. I don't even have to tell them, 'Circle pit' — they will do it themselves. It's just the power of music."

Max told Sticks For Stones about the writing process for "Beneath The Remains": "It was a crazy time, man. At that time in Brazil, we only used to play five shows a year, so it was very slow and we were, like, really hungry — we wanted to do more. We knew we could do more. We knew we could be touring. It was a bit of frustration building inside the band, but we knew if we kept working, things will eventually pick up. I got a contract. I finally got a ticket to New York and dropped off a bunch of records in New York and one [label] was Roadrunner and Monte [Conner] called us back and gave us a contract. We were on cloud nine. Recording for the first time with a real label and with a producer. Scott [Burns, producer] came to Rio and did 'Beneath The Remains'. We worked really hard on 'Beneath The Remains' and I think it shows the maturity of the band. You can tell from 'Beneath The Remains' to 'Arise' that grew, also, again. 'Arise' is a different beast from 'Beneath The Remains'. I think together, these two records, they were made for each other. I think 'Beneath The Remains' and 'Arise', if you listen to them together, it's more fun than separate. That's why I had this idea to do the shows, it was Igor's idea to do both records together. I think it was genius. It was really good. We eliminated some of the fillers that we think wasn't that exciting, stuff like 'Subtraction' and 'Meaningless Movements' — those were fillers. We just played the 'hits.' [Laughs] It's a full, aggressive, brutal, all just metal, late '80s. That era in metal was great. It was what I called the 'golden era of metal.' We had us, you had OBITUARY, you had MORBID ANGEL, DEATH and then in Europe, ENTOMBED, CARCASS, GODFLESH. Fuck, man, it was the exciting era of metal. We rode that high with touring. The 'Arise' tour was great; 15 months that took us around the world, Indonesia, Australia, Russia and it was the beginning of it. So, yeah, I look back with really fond memories of that time and that's why it's so cool to play these records nowadays. It kind of makes us remember some of the good times we had and appreciate the record and I really appreciate being back with Igor and be able to do this with him again. It's even more fun and it sounds even better 30 years later. The record sounds better than they did when they first [came out]. It's like we injected new life into those songs and they're even better live now than they were. It's a really, really fun, exciting thing to be able to do this right now in our career."

Speaking about SEPULTURA's musical growth on "Arise", Max said: "I think it was the fact that we started touring on 'Beneath The Remains'. We started seeing the world — we went to America; we went to Europe. It opened a lot of doors for us and made us realize we can do more, and we should do more. We started listening to stuff like FEAR FACTORY and a lot of hardcore and MINISTRY, so the album has an industrial kind of vibe... It was just what we were exposed to, but I think it's still death/thrash as fuck. I mean, 'Arise', to me, is the ultimate death/thrash song of all time. I heard ABORTED doing a cover of 'Arise' that just freaked me out how good it was and how cool it was. It made me really realize how cool the song is. 'Arise' is a bad-ass song from beginning to end." 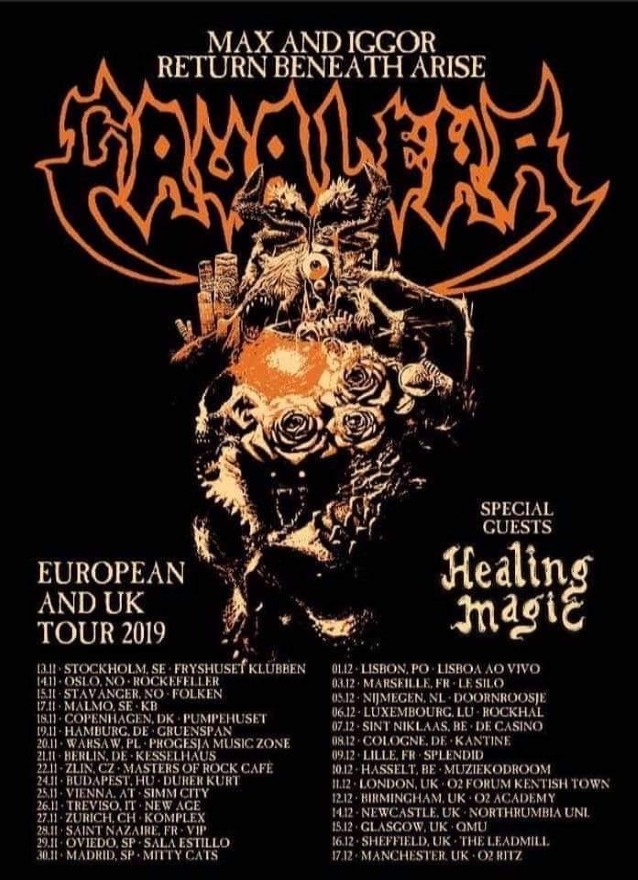