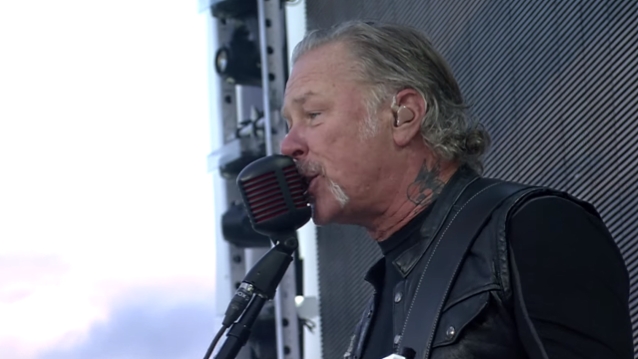 METALLICA dedicated its cover version of "Whiskey In The Jar" to Phil Lynott during the band's June 8 concert at at the iconic venue Slane Castle in Meath, Ireland.

Professionally filmed video footage of METALLICA's rendition, with frontman James Hetfield saying "We love you, Phil" at the end, can be seen below.

"Whiskey In The Jar" is one of the most widely performed traditional Irish songs and has been recorded by numerous artists since the 1950s.

In 2000, METALLICA received a Grammy in the "Best Hard Rock Performance" category for its rendition of the song.

After the Slane concert, Hetfield posted a photo on Instagram of him and the statue of Lynott in Dublin. "Much respect and love to my favorite songwriter, Mr. Phil Lynott," James wrote in an accompanying caption.

METALLICA concert Saturday night marked the band's first appearance in Ireland since it played in Belfast in 2010 and Dublin in 2009. The legendary heavy metal act was unable to play in the country during the indoor leg of the "WorldWired" tour last year because of the size of its stage show.

METALLICA is continuing to tour in support of its latest album, "Hardwired… To Self-Destruct", which came out in November 2016.