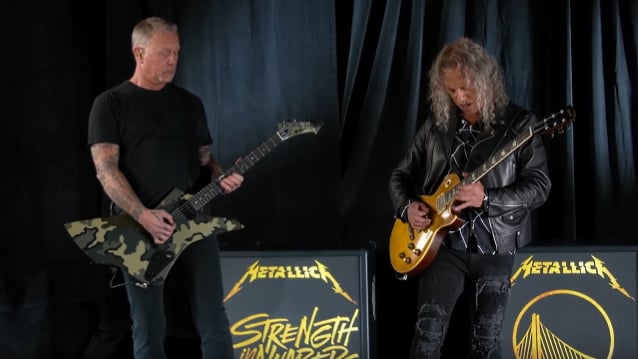 METALLICA guitarists James Hetfield and Kirk Hammett playeed the U.S. national anthem before tip-off on Monday (March 15) as the Golden State Warriors took part in a Western Conference NBA showdown versus the Los Angeles Lakers at the Chase Center in San Francisco, California. Check out video below.

Hetfield and Hammett previously performed "The Star-Spangled Banner" for the Warriors before game 3 of the NBA finals against the Toronto Raptors in June 2019.

Hammett told ESPN.com that he feels the version of the national anthem they perform is "really unique and different."

Prior to Monday night, the pair most recently performed it virtually before the September 2020 baseball game featuring the San Francisco Giants and the Colorado Rockies.

"They're always a pleasure. Come on, to be able to support a hometown team in the best possible way, it's a huge honor," Hammett said in an interview. "And also to be able to play the national anthem for a hometown team, that's just beyond huge. As a native San Franciscan, the honor to be a civil servant for San Francisco cannot be higher for me to play the national anthem with James."