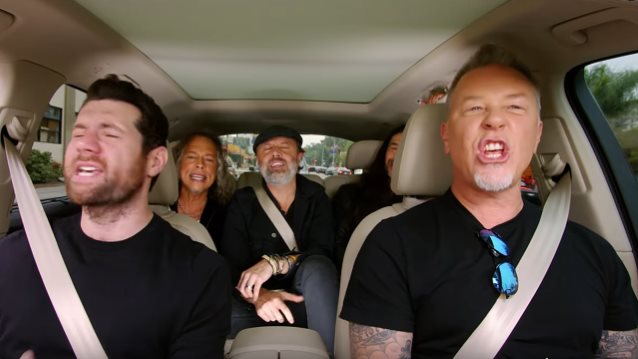 Footage of METALLICA singing a song by pop superstar Rihanna is featured in a trailer for the "Carpool Karaoke"Apple Music series.

A newly released "Carpool Karaoke" extended teaser trailer shows Lars Ulrich, James Hetfield, Kirk Hammett and Robert Trujillo belting out Rihanna's 2012 song "Diamonds" alongside Eichner. Later on, the band makes a stop at a supermarket where they end up serenading the workers behind a deli meat counter.

"Carpool Karaoke: The Series" is being rolled out in partnership with Apple Music, where episodes will premiere exclusively through the tech giant's $10-a-month streaming service. The show will feature 16 celebrity pairings riding along in a car as they sing their favorite songs.