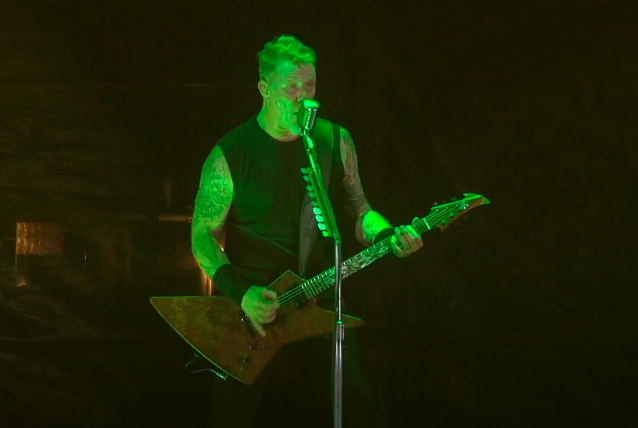 METALLICA has posted another video as part of its new concert series, "#MetallicaMondays", where the band is streaming a complete live show for fans on the group's YouTube channel and on Facebook every week. The latest concert to be shared was recorded on September 14, 2011 at Yankee Stadium in Bronx, New York and was the last "Big Four" event featuring METALLICA, SLAYER, MEGADETH and ANTHRAX.

In a 2018 interview with SiriusXM's Eddie Trunk, Dave Mustaine was asked if MEGADETH and the other bands would be interested in playing more "Big Four" shows before SLAYER finally pulled the plug on its touring career.

"I think if you asked the three of us [MEGADETH, SLAYER and ANTHRAX] that our camps would probably say yes," he responded. "If ANTHRAX, SLAYER and MEGADETH all wanna do it, and METALLICA doesn't, then what do we do? The 'Big Three'? I'm sure that a lot of people would like to see that, and that may be what it is. You know, you may end up having it be the 'Big Three' plus No. 5, if we have EXODUS play with it.

"But it's not about just doing concerts for the sake of concerts — it was about the movement, it was about what we did together as a group," Mustaine continued. "And excluding ANTHRAX, we were all like neighbors almost, 'cause we all lived so close; it was just a half hour to an hour at the most between each other's houses on the freeway.

Asked by Trunk if there was a highlight moment for him at any of the previous "Big Four" shows that made the experience "extra special," Mustaine said: "Not really. They all had significance to it. I think that the playing at the end was fun too. But I think it always kind of soured to me when you watch [METALLICA guitarist] Kirk Hammett say on the DVD ['The Big Four: Live From Sofia, Bulgaria'], when they're praying, and he says that 'we're the Big One.' That just kind of shows you how the mentality was there — that it really wasn't the 'Big Four'; it was METALLICA and then the three of us."

Mustaine added: "I would love to see it done in a way where we all got treated fairly and we all played together, same amount of time, same kind of stage situation, but I don't think that's gonna happen. And it's cool, because SLAYER's gonna down in history, and they don't need the 'Big Four' to make them any more legendary than they already are. Nor do I."

Seven years ago, SLAYER frontman Tom Araya said that the only thing that was standing in the way of further "Big Four" shows was "the politics of character in one particular band," with some fans speculating that he was talking about Mustaine and MEGADETH.