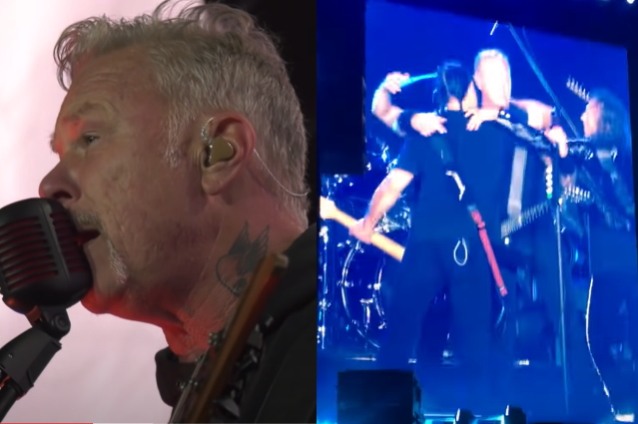 METALLICA's James Hetfield got emotional during the band's concert Thursday night in Brazil, admitting to the audience that he was "feeling a little bit insecure" prior to taking the stage.

Before launching into the classic METALLICA song "Sad But True" at Estádio do Mineirão in Belo Horizonte on May 12, the 58-year-old guitarist/vocalist thanked the 60,000-plus people in attendance, saying how he and his bandmates are "so blessed" to have the support of such a loyal fanbase. But then he added (as transcribed by BLABBERMOUTH.NET): "I've gotta tell you I wasn't feeling very good before I came out here. [I was] feeling a little bit insecure, like I'm an old guy, [I] can't play anymore — all this bullshit that I tell myself in my head. So I talked to these guys, and they helped me — as simple as that. They gave me a hug and said, 'Hey, if you're struggling on stage, we've got your back.' And I tell you, it means the world to me." At that point, all three of James's bandmates approached the singer and once again gave him a heartfelt group hug, with Hetfield visibly touched by the gesture. He then once again addressed the audience, telling them: "And seeing you out there, I… I am not alone. I am not alone, and neither are you."

James has been open about his battles with addiction, anxiety and low self-esteem in the past, most recently last fall while discussing the transformation he had to undergo in order to successfully front METALLICA during the touring cycle for the band's 1991 self-titled album, which stands as one of the top-selling records of all time.

He told Apple Music's Zane Lowe in October 2021: "There was such an expectation already on myself to not let the team down and be the best as possible. But then you add 60,000 people out there… You need to be what they need you to be, 'cause this is what you've evolved to be. And it is a little bit of Oz," referencing the classic 1900 children's book "The Wizard Of Oz" by L. Frank Baum which was then adapted into the two-time Oscar-winning film in 1939. "Like, the man behind the curtain, pay no attention, but this guy behind the curtain is just dying and struggling and freaking out and not knowing who he is."

He continued: "The word 'unraveling' is a great word, like unlearning, unlearning all of what happened before. That was a part of me, for sure, but it dominated all of me. And the parts that weren't happy about me — there's a huge codependence and insecurity, a lot of that — that… Gosh, I can't… I'm no good without these guys. Who am I? Off tour, it's, like, 'Who am I?' Like any first responder or football player or even a soldier, you take your uniform off and you're a civilian again. [And you start asking yourself] 'Who am I? I don't know who I am.' There was a lot of fear in that."

Five years ago, Hetfield told the Des Moines, Iowa radio station Lazer 103.3 that he doesn't read online comments from METALLICA fans. "I've got tons of friends that are either musicians or artists or someone who are creative and putting stuff out there. I just tell 'em, 'Don't read the comments. I mean, just don't. Unless you're feeling a little more secure in yourself these days,'" he said. "'Cause most of us artists are pretty fragile, insecure people, and we get up there and the music makes us feel strong and good. But other times when people… you know, someone says something about the lyrics, and it's just, like, 'Ouch! That went right in my heart, dude!' So I tell you, when you read that stuff, you can't believe it — you just can't. Most people… It's really easy just to hit 'send' [on your phone or computer] — I know that. But we also do get a lot of great comments out there that kind of work themselves out. It's like throwing a couple of pitbulls in a room — they work it out. You don't have to… Especially on the METALLICA site, they have people… it goes back and forth. And as long as there's passion, that's all that matters, really."

Back in September 2019, Hetfield re-entered a treatment program to work on his recovery from alcohol addiction. He had previously been to rehab nearly two decades earlier for the same problem.

In a 2003 interview with Kerrang! magazine, Hetfield spoke about his battle with the bottle and the much-publicized trip to rehab in 2001 that had seemingly enabled the singer to emerge a much healthier and more positive-thinking person that he was during much of the group's 40-year career.

During a 2017 interview with "The Joe Rogan Experience" podcast, Hetfield spoke in more detail about checking into rehab 21 years ago and how he almost lost his family in the process.

*Posting this since a lot of people are sharing the pictures from Instagram, these should have a higher resolution here...