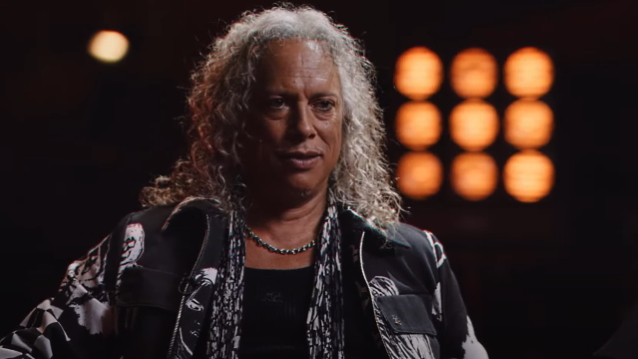 Watch: METALLICA's KIRK HAMMETT Talks About His Love Of Horror In New Episode Of 'Metal And Monsters'

In the first-ever "Metal And Monsters" Halloween special, host Count D (a.k.a. ROB ZOMBIE bassist Matt "Piggy D." Montgomery) sits down with METALLICA guitarist Kirk Hammett to discuss monsters, metal, and horror memorabilia. Featuring photos from the films that helped shape his love of horror, Kirk and Count D share talk about their love of films, including "The Texas Chainsaw Massacre", "The Exorcist" and "Nosferatu".

Throughout the 60-minute episode, viewers are also treated to different segments that explore the worlds of monsters and metal mania. In a segment titled "Tunes From The Crypt", Count D revisits TYPE O NEGATIVE's landmark album "October Rust" and gives fans a chance to win some exclusive prizes!

But that's not all! In a historical piece titled "Exhumed From The Tomb", Count D sits down with ANTHRAX drummer Charlie Benante to explore the band's 40-year history.

Filmed on location in downtown Los Angeles, the backdrop for "Metal And Monsters" is the historic 2,000-seat Los Angeles Theatre. Constructed in 1930, Charlie Chaplin helped fund the completion of the building so it would be ready to premiere his film "City Lights" in January of 1931. After closing its doors in 1994, the Los Angeles Theatre sat vacant for many years until serving as a film and television location for productions including "Man On The Moon", "Charlie's Angels", "Mad Men" and "The Lords Of Salem".