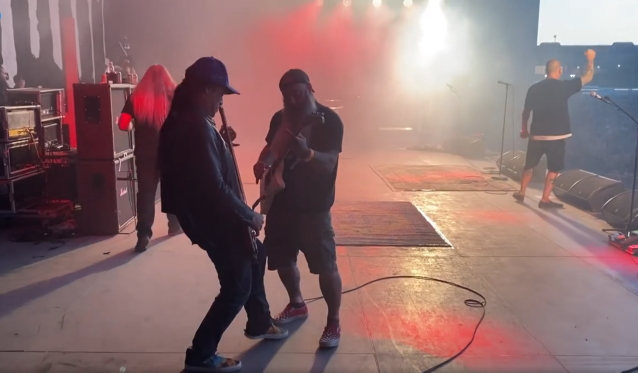 METALLICA bassist Robert Trujillo joined DOWN on stage Thursday (June 16) at the end of the Philip Anselmo-fronted band's set at the Copenhell festival in Denmark. British musician Paul Bond, who is apparently traveling with DOWN as part of the band's road crew, shared video of Trujillo's appearance and wrote in an accompanying message: "OK … so this DID happen last night! Rob Trujillo got invited to jam with DOWN, but Kirk [Windstein, DOWN guitarist] handed his guitar to ME! I got to share the stage with DOWN and Rob… as James Hetfield, Lars [Ulrich] and some of KORN watched from the side! If there weren't documentary evidence, I probably would have passed it off as a weird dream!!!"

METALLICA headlined the first night (Wednesday, June 15) of Copenhell, which is taking place over four days at Refshaleøen in Copenhagen. Other bands who were scheduled to perform at the sold-out event are IRON MAIDEN, KISS and JUDAS PRIEST.

Last month, Windstein spoke to Pierre Gutiérrez of Rock Talks about the status of DOWN's long-discussed EP of "obscure" cover songs. He said: "We have been talking about this for a long time. What's been happening is DOWN is kind of now as it started, which was a side project. We love doing it and it's a ton of fun and we love it — we love the band; it's an amazing band — but everybody's back to doing their other bands. Pepper's [Keenan, guitar] doing C.O.C. full-time, Jimmy's [Bower, drums] doing EYEHATEGOD, I'm doing CROWBAR, Phil's got a lot on his hands and a lot of projects, as he always did and always will.

OK … so this DID happen last night!
Rob Trujillo got invited to jam with Down, but Kirk handed his guitar to ME! I got to share the stage with Down and Rob… as James Hetfield, Lars and some of Korn watched from the side!
If there weren’t documentary evidence, I probably would have passed it off as a weird dream!!!