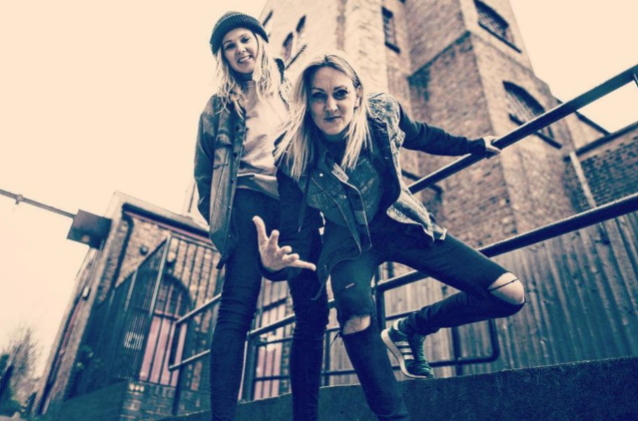 POP EVIL's HAYLEY CRAMER Marries Fellow Drummer SIÂN MONAGHAN: 'I Am A Wife! And I Have A Wife!'

The British-born Cramer took to her Facebook page earlier today to share photos of the ceremony, and she wrote in an accompanying message: "4th of June 2022 - The day that made me the happiest I've ever been!
I still have to pinch myself that a dream I dreamed for many many years came true…. I am a wife! And I have a wife!!! To say I'm proud would be an understatement.

"@siany_drums WE DID IT! Mrs & Mrs Cramer Monaghan. Together we are stronger, together we drum up a storm, together we rock!
"Beaming love and thanks to our beautiful family and friends and all who support us. Feeling all your love surrounding us on our day and throughout our life means everything.

Session drummer Siân is best known as the driving force behind psyche-pop artist SHE DREW THE GUN, though her career has seen her drumming with a range of artists, including CHINA CRISIS, THE WANDERING HEARTS, Derek Forbes (SIMPLE MINDS) and FINK.

Last summer, Hayley appeared on the podcast "Side Jams With Bryan Reesman" to talk about her passion for women's rights and LGBTQ rights. Regarding her gender orientation and being a role model for women, she said: "I'm predominantly known as a female. I present myself as a female. But there's a huge part of me that feels I should have been born a man. And now we're touching on the subject of me being in a band with a bunch of men, and me being the gay female. And it works. It works because if I close my eyes, I'm neither male or female. So if I'm in a band with a bunch of men, I'm the same as them. If I'm in a band with a bunch of females, I'm the same as them. I'm predominantly more towards the masculine side, but the way I present myself is more towards the feminine side. And maybe that was a choice I made for my career. I'll hold my hand up to that. If I didn't have my drumming ability, and I was doing a different job, I may have made the transition to a man.'

As for being an advocate for LGBTQ rights, she said: "I didn't want females to be seen as this novelty thing. I wanted to get really good at drums and prove the fricking world wrong. I kept long hair, I didn't get loads of tattoos. I didn't shave my head. I kept quite feminine to prove a fricking point, and that was really uncomfortable for me for a long time. To buy makeup for me was a real struggle. If I walk into a shop to buy makeup, I still feel uncomfortable if I'm standing in a makeup section. I felt that...and then female underwear or female time of the month products. I still struggle every time. Every time I have to walk into a shop and be in that section, it just doesn't feel right. So there's that side of me that's very, very masculine. But my career looks very feminine. But it was a definite choice I made, and maybe that's a sign of the times. I hope down the line that girls don't necessarily have to make that choice."

Regarding being supportive of gay fans, Hayley said: "I would say as a gay musician, touring around America really highlights the work I still need to do. I love every state. One of the things I love about my job is hanging out with people. Where are you at? What's your life about? Like, Tell me your story. But sometimes, I am a little shocked that… I teach kids in America. I have online tuition right now. I'm teaching kids that are going through worrying about if they're gay, and they're in a state that is just not supportive. Having been there, I know it's not supportive, and I know the struggle that they're going through. And I wish I could just beam them to my little town in London for a minute to experience...like, it is okay. There are places in the world where you can be you. Your town just hasn't caught up yet."

She went on to say that she is supportive of her gay students. "I've always taught drums alongside what I do, so I like to play a part in helping out the youth," she explained. "Because when I think back to when I was that age, I didn't really have anyone to call upon with the struggles I was going through. My mum and dad are fantastic. Thank God, they're fantastic. But they didn't necessarily know about this kind of stuff. And when I see drummers come through my teaching, I can't help but just slightly be there. And just to say, ‘Hey, I see you.' I would never influence them because I'm very aware of the power of being a musician in a rock band that is held on a pedestal. So I never influence these kids, but I also let them know that it's a safe space. You're all right. You can be you. It's a tough one, though. The fact that we're still here talking about this stuff is kind of frustrating."

Two months ago, POP EVIL released a gritty new single, "Eye Of The Storm", along with an accompanying video directed by Sam Shapiro.

POP EVIL will begin its headlining tour on June 23 in Milwaukee at Summerfest, concluding on August 14 in Wichita at The Cotillion with special guests ZILLION and OXYMORRONS. POP EVIL will also support SHINEDOWN on its summer 2022 Canadian tour, starting on July 19 in Quebec City at Centre Videotron and ending on August 3 in Abbotsford at Abbotsford Centre.

POP EVIL celebrated its seventh career No. 1 single on Billboard's Mainstream Rock chart in late 2021 with "Survivor" marking a historic milestone. "Survivor" joined the previous Top 10 single "Work" and No. 1 single "Breathe Again" from POP EVIL's latest album "Versatile", out now via MNRK Heavy. Over the course of its career, POP EVIL has achieved four gold singles with "Torn To Pieces" and "Trenches" from "Onyx", "Footsteps" from "Up" and "100 In A 55" from the band's debut studio album, "Lipstick On The Mirror".

I still have to pinch myself that a dream I...