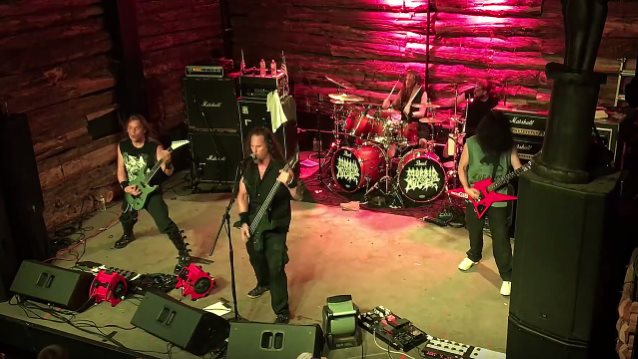 Fan-filmed video footage of MORBID ANGEL's entire June 24 concert at at Come And Take It Live in (Grizzly Hall) in Austin, Texas can be seen below.

MORBID ANGEL played a brand new song, "Warped", live for the first time on May 23 at the opening show of the band's North American tour at The Beacham in Orlando, Florida.

In a recent interview with Orlando Weekly, MORBID ANGEL's current frontman, Steve Tucker, who is back for his third spell with the group, was asked if the band's latest trek — which ended on June 27 in New Orleans — would see the band performing any songs from its recently completed new studio album. "Probably one or two new songs; the album's almost done, but we don't want to put out too much with YouTube putting it up the next day," Tucker explained. "The setlist will be different, too — in the past, we've covered all of MORBID ANGEL's discography, but this time we went with the discography between Trey [Azagthoth, guitar] and I. I'm really excited about the fact that every song we play is a song I was a part of. There are some MORBID ANGEL classics that aren't there, but we made our own classics."

Tucker told "The Metal Magdalene With Jet" show about MORBID ANGEL's approach on the upcoming album: "It was really just about writing music — it was just about writing a MORBID ANGEL album. Nobody said, 'Hey, we wanna go in this direction,' nobody said anything. I mean, there's obvious things there. I've said it before — I'm a death metal guy, so, for me, it's gonna be a death metal album; if I'm on it, it's death metal. So it was just about making a MORBID ANGEL album. It was really about coming in with something new, something fresh, but yet it still being MORBID ANGEL. Really, honestly, we didn't approach this any differently than any of the other albums I was involved in except for maybe [1998's] 'Formulas Fatal To The Flesh', which 'Formulas', Trey wrote all the music, all the lyrics and things like that. But this was done more similar to maybe [2000's] 'Gateways To Annihilation', where everybody had their contribution. Trey wrote a bunch of songs, I wrote songs, Scotty contributed some ideas. There was a lot of back-and-forth. In the end, it has to become a MORBID ANGEL song. And at this point, I feel that it's very much a MORBID ANGEL album." 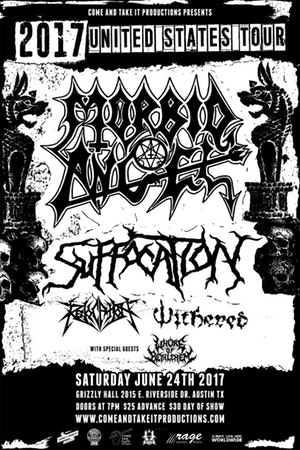