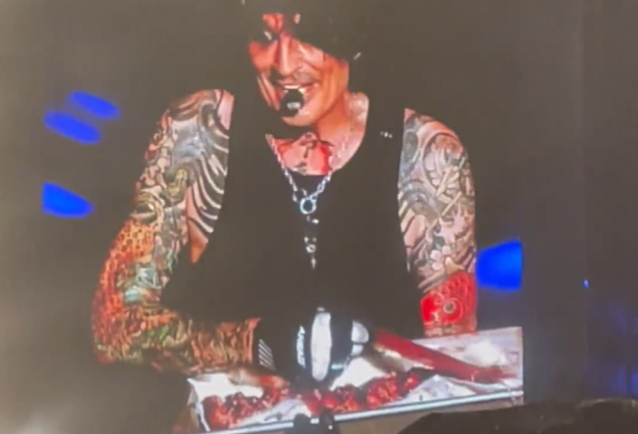 As was the case at the previous three shows of "The Stadium Tour", Lee once again defied doctor's orders — despite sustaining four broken ribs — to take part in the CRÜE's long-awaited return to the stage with DEF LEPPARD, POISON and JOAN JETT & THE BLACKHEARTS.

Last night's performance in front of about 40,000 fans also marked the second of the first four dates disrupted by rain and lightning. CRÜE's headlining concert followed a 90-minute wait until the lightning — but not the rain — ceased.

After playing three songs with his bandmates, Lee told the crowd that he had broken four ribs, and his doctor told him he couldn't perform. He also took the opportunity to have some fun with the audience, bringing out what appears to be a roasting pan full of beer cans and ribs, which he then proceeded to throw into the crowd.

CRÜE's long-delayed North American trek with DEF LEPPARD, POISON and JOAN JETT & THE BLACKHEARTS was originally planned for 2020 and later moved to 2021 and then to 2022 due to the coronavirus pandemic which is sweeping the globe. "The Stadium Tour" will conclude on September 9 in Las Vegas, Nevada.

The next show on the trek is scheduled to take place Friday night (June 24) at Citi Field in Queens, New York.

Yes. He did play some last night!! Broken ribs and all! And as we all know… this is Tommy Lee so yes…. There is a lot of foul language 😂😂