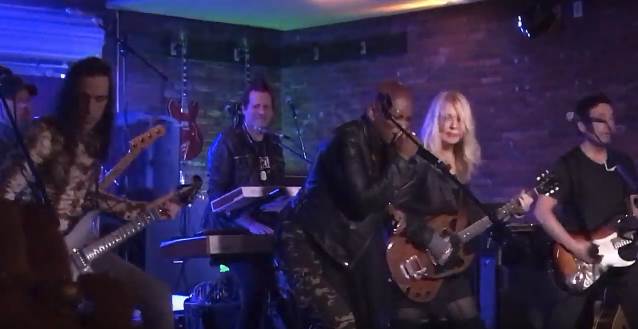 HEART's Nancy Wilson made an unannounced appearance at this past Saturday's (May 26) weekly "Soundcheck Live" event at Lucky Strike Live in Los Angeles, California.

Video footage of the performance can be seen below. Photos are available at WillToRock.com (courtesy of Will Greenberg).

"Soundcheck Live" is a weekly live music night that brings together the industry's top musicians alongside emerging talent to create a vibrant social experience driven by the artists.

Nancy and her sister, HEART singer Ann Wilson, had a very public falling out in 2016 due in large part to an incident in which Ann's husband Dean Wetter was arrested and convicted on charges of assault against Nancy's 16-year-old twin sons backstage at a HEART show in suburban Seattle.

Nancy told ABC Radio last month that she and her sister "[have] done a little more communicating recently" and revealed that "HEART has a nice offer to go on a tour next year, so [I'm] hoping [for that]."