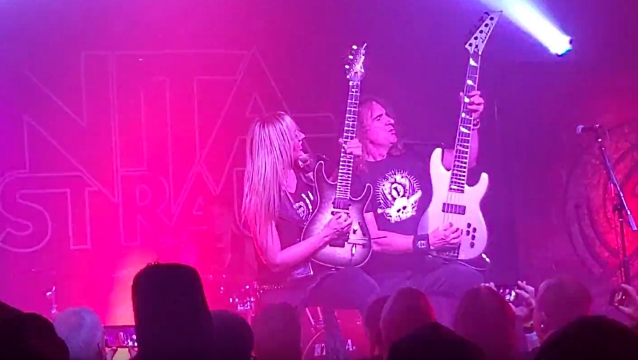 In a recent interview with Meltdown of the Detroit's WRIF radio station, Strauss was asked if her debut solo album, last year's "Controlled Chaos", turned out to be exactly the kind of record she wanted to make. "It really is," she said. "I'm very, very proud and very pleased with how it came out. And for it to make the statement the way that it did, for 'Controlled Chaos' to debut in the Top 10 of the iTunes rock chart… We debuted behind QUEEN and Chris Cornell, so it's not like we were just hidden away in the back of the instrumental metal category. We were out there in the forefront. We debuted in the big Billboard Top 200, so it was just amazing to see that people in 2019, or 2018 when it came out, that in this day and age [they] really care about hearing an instrumental guitar record. And it meant everything to me."

"Controlled Chaos" was released in November via Sumerian Records.

"I started playing guitar because of instrumental guitar music," Nita said in a statement. "All my real heroes made instrumental albums. All my own career has been spent playing in bands, but I never forgot that dream of what inspired me to pick up the guitar in the first place."