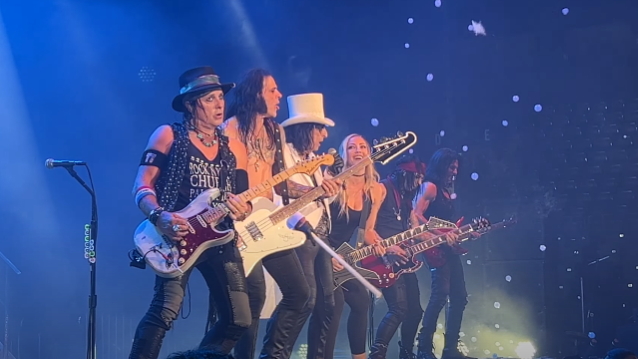 The 35-year-old musician, who left Alice's touring band earlier this year to join the backing group of pop star Demi Lovato, came up during the encore of Cooper's set to play guitar on his classic song "School's Out".

After being introduced by Alice as "Her Majesty, Queen Of The Guitar", Nita took the stage alongside Cooper's three guitarists, including the returning Kane Roberts, who stepped back into the lineup following Nita's exit.

After last night's show, Nita shared a few photos of the performance on Twitter and included the following message: "Hurricane meets Hurri-Kane @Kane_Roberts

"Such a treat getting to not only see the amazing @alicecooper show from the audience for the first time, but hop up and join the boys for the encore last night. Thank you all for the warm welcome!"

She added in a separate tweet: "I had the best time!"

Nita, who spent eight years playing with Alice before joining Demi's band, was asked in a recent interview with Metal Injection if it was a "nerve-racking" experience telling the legendary rocker that she wanted to step back from performing with him. The guitarist responded: "I wouldn't even say nerve-racking, because… I mean, it was a big decision, of course, but it definitely wasn't as dramatic as it has seemed online, if that makes sense. We had just started the U.K. tour when I got the offer to come and play with Demi. And I just went into Coop's room — I went to his hotel room and I talked with him and his wife. And I said, 'Look, I have this opportunity.' He asked, 'Would it conflict with anything on this tour?' I said, 'No, but it would conflict with the fall dates, so I'd have to step back from the fall tour.' And he said, 'Go and do it.' He gave his blessing. He gave me a big hug and said, 'Go and have fun. Shine your light, and let us know what next year looks like and we'll work it out.' So it was a lovely and loving conversation — no big blowup; no drama; no one got fired; no one stormed out. And I took a step back and I'm trying something different. And we'll see what happens in the future."

According to Nita, "it didn't help" that the news of her joining Demi's touring band "got leaked before anybody had a chance to really say anything. I don't really know how that news got out, 'cause it was all pretty close to the vest," she said. "But somebody found out, somebody decided to put it out before anybody really could make a proper statement about it, and I think that's how these things get twisted around into something that it's not.

"We had a — Alice literally called it a 'hiatus dinner,'" Nita added. "One of our last shows in Greece, we had a couple of days off, and we had a big 'hiatus dinner' and we all laughed and cried and hugged and they gave me a little parting gift. And if that was the last show at the end of the tour, it'll be okay. But there was no big dramatic exit that people were speculating. And now that I'm clearing it up, there is also no backtracking. [Laughs] I think people just love to speculate without really knowing the actual workings of what's going on."

Nita told Louder about how she ended up playing with Lovato: "So I actually got a text from Demi's musical director when I was on the road with my solo band on the BLACK LABEL SOCIETY tour, and essentially what it said was what we all know now: Demi is a huge rock and metal fan. And Demi wants to go back to her routes and wants to put together an all-female rock band. She's really one of the biggest stars in the world and she wants to take a step into our genre and this style of music that we love so much. When you get that text, that somebody wants to bring that type of music to the forefront, how do you say no? How do you turn down this opportunity to bring this style of music to so many more people? So I was thrilled to hear about it and I jumped at the opportunity. This was all way back in May. It's been in the works for a really long time."

I had the best time! Thanks for the warm welcome. https://t.co/wtIGZOlIUM

Such a treat getting to not only see the amazing @alicecooper show from the audience for the first time, but hop up and join the boys for the encore last night 🥰 thank you all for the warm welcome!@cerealkylerpic.twitter.com/Q64dYFVX6Z