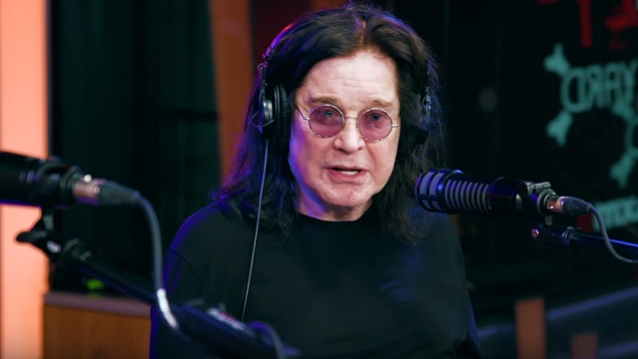 To coincide with the November 29 release of his new "See You On The Other Side" box set on Sony Legacy, Ozzy Osbourne taped a special edition of his "Ozzy Speaks" show for his Ozzy's Boneyard channel on SiriusXM. Watch below as Ozzy talks about the set with good friend/guitarist Billy Morrison and SiriusXM host Jose Mangin.

The "See You On The Other Side" box set is the definitive vinyl collection of all of Ozzy's original solo material. The package includes 16 albums of 24 pieces of vinyl (173 songs total), a seven-inch flexi disc, 10 posters, 12 AR (Augmented Reality) experiences, and an individually numbered vellum certificate of authenticity, personally autographed by Ozzy Osbourne.

The box set will be followed by the release of Ozzy's new album, "Ordinary Man", due out on Epic Records in early 2020; it marks Osbourne's first new solo music in almost 10 years. The album has been previewed by two singles, "Under The Graveyard", a massive ballad that builds into a searing rocker, which arrived two weeks ago and garnered more than 2.8 million global streams in its first week, and the full-on rocker "Straight To Hell", where Ozzy takes listeners to the heart of darkness, with GUNS N' ROSES guitarist Slash along for this devilish ride, delivering scorched-earth riffs.

Here are the details of the "See You On The Other Side" box set:

Vinyl: 173 songs total on 16 albums, each of which is 150-gram, hand-pressed multi-colored splatter vinyl, making each pressing unique. Many of the albums are previously unavailable or are currently out of print on vinyl. The collection also includes "Flippin' The B Side", a new collection of non-album tracks, which has never been pressed to vinyl. In addition, "Black Rain", "Down To Earth" and "Scream" have never been pressed in the U.S., while "No More Tears" was remastered from the original flat analog album masters and is offered as a two-LP set which will allow the album's songs to be uncompressed for the very first time ever on vinyl.

AR: Twelve AR (Augmented Reality) experiences will be included throughout the package. Additional details will be announced in the coming weeks.

"This one's the most elaborate collection so far," Ozzy says. "It's very well thought-out and well put together. It's got everything in there that you possibly could want and some surprises along the way. The sound of a vinyl record is different, and I do believe that vinyl sounds better."

The full list of vinyl (all of which contain the original track-listings) is as follows:

"Flippin' The B Side"
(a new collection of non-LP tracks)

"You Looking At Me Looking At You"
Originally from the "Crazy Train" UK 7" single, released 1980

"Hero"
Originally a hidden track from the "No Rest For The Wicked" US CD and cassette release, released 1988

"Party With The Animals"
Originally from the "Mama I'm Coming Home" US CD single, released 1992

"Living With The Enemy"
Originally from the "Perry Mason" UK CD single, released 1995

"Voodoo Dancer"
Originally from the "I Just Want You" UK CD single, released 1996

"Back On Earth"
Originally from "The Ozzman Cometh" compilation, released 1997

"No Place For Angels"
Originally from the "Gets Me Through" CD single, released 2001

"Walk On Water"
Originally released on "Prince Of Darkness," released 2005