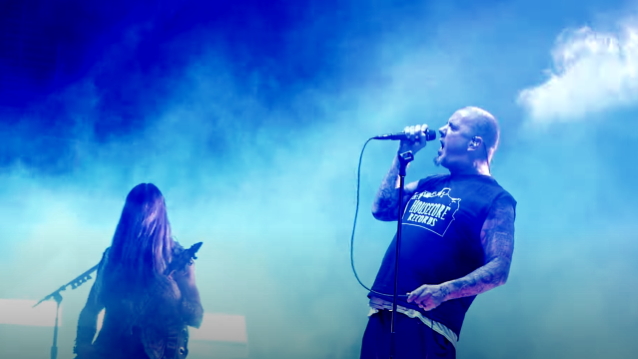 Earlier on Tuesday, Benante reflected on the Hell & Heaven concert during an appearance on SiriusXM's "Trunk Nation With Eddie Trunk". He said (as transcribed by BLABBERMOUTH.NET): "Basically, we get up there and there's a big kabuki curtain in front of us and the four of us just up there. And Philip came up to the drum riser and we just had this moment where we were shaking hands. We were so excited. And then I looked to Rex and I looked to Zakk, and the four of us just had this connection. And before I knew it — boom — we were right into playing 'A New Level'. And it was off from that point. And I was looking at the setlist, and I saw the next song coming up, and I was excited about that song. And then that song would finish, and I looked down, and I'm, like, 'Oh, I fucking love this song. Yeah!' It was that all night for me — just getting super hyped up about the next song and what was coming up. So I enjoyed myself."

He continued: "One thing I spoke to those guys about months ago, I said, 'Man, let's just try and be in the moment and just enjoy it.' And that's what we all did — we just kind of enjoyed it."

Speaking about how he and the members of PANTERA came up with the setlist for the Hell & Heaven performance, Charlie said: "Actually, Rex, myself and Philip, we were on a call and we basically came up with the setlist. And I remember saying to them, 'You guys are really close to this stuff. From my point of view, like a fan, man, these are the songs that, of course, must be played.' And, of course, they agreed with that. But then there were some deep cuts that we wanted to do too. And they were welcome to it. We even talked about adding more songs to the setlist for next year. So everybody's pretty much open. The way I kind of looked it is, 'Let's try and hit every record. Let's try and do a song from every record at least.' So that's what we're trying to do."

He added: "For this run here in South America, we're gonna keep [the setlist] as is, but next year I can see a song or two being dropped and replaced with another song. We already talked about that the other day."

Benante told "Trunk Nation With Eddie Trunk" that Dimebag and Vinnie are a big part of the new PANTERA show.

"Before 'Planet Caravan' starts, we have this video that runs with a little piece of the song 'Cemetery Gates', and it's basically a tribute to Dime and Vinnie," he explained. "I mean, Dime and Vinnie are all over the place. They are on my drum kit. Zakk has patches with them. But even in spirit, they're there.

"Before we went on, Sterling Winfield, who was very close to Dime and Vinnie — he basically engineered the last three records that PANTERA did — he brought me a pair of Vinnie's old gloves, and he brought me one of Darrell's old wristbands that he wore," Benante added. "And I put the wristband on and I played the show with that wristband. And I put the gloves in my pocket. So I had both of them with me that night."

Regarding how he prepared for the PANTERA live performances, Charlie said: "When I talked to Philip back in — it was, like, the end of December [2021] about this, that day, I hung up the phone and I immediately started to get my head into PANTERA mode and just figure things out. Because I knew these songs, but I didn't know how to approach playing the songs, how I'm gonna do this. And the one thing I wanted to do is I just wanted to play it like Vinnie. When the fans hear it, when anybody heard it, I wanted them to be able to close their eyes and I wanted it to sound like Vinnie."

As for how he felt about his personal performance at Hell & Heaven, Benante said: "I felt good about it. There was a couple of things that I am going to just play a little differently. Not so much the parts, but I think we were all a little bit — the adrenaline was going, and I wanna just pull some songs back a bit. We're playing here [at Monterrey Metal Fest in Monterrey, Mexico] tonight, and I think I'm going to just kind of relax a little more and just kind of settle down. I mean, it was the first show, so it was expected. We're human. I'm not playing to a click track. So tonight I think I'm gonna lay back a little bit more."

Charlie also talked about his musical chemistry with Rex, saying: "That's the thing. I didn't know how we would kind of come together and when we would make the connection. But I've gotta be honest with you, when I went down to New Orleans in September and it was just me, Rex and Philip. And after the first day, Rex and I, we had such a connection, and he said to me, he was, like, 'Dude, when I close my eyes, I feel like it's Vinnie up there.' So that made me feel so good when he said that. And Philip said the same thing too. So I was so happy about that. Because, honestly, I really did my homework. We're talking these tiny little nuances — things that maybe people wouldn't hear — I'm putting 'em in there because it's important to me to deliver it just like Vinnie would."

As for his drum setup for the PANTERA show, Benante said: "It's a totally different configuration [to what I play with ANTHRAX]. I'm playing more like Vinnie's kit, the way Vinnie played it. I wanted to play a kit like that because it gave me a bit more of a challenge. And I can't add more drums to it, because I just wanted to have the two toms in the front — floor toms — so I'm just sticking totally to the way he had it, and I wanna play it exactly like he had it and it sounds exactly how he had it too. So that's how I approach this."

Charlie went on to say that he doesn't understand all the negative comments that have been directed at him and the other members of PANTERA for trying to keep the band's legacy alive.

"This was never a reunion," he explained. "How can it be a reunion without Vinnie and Dime here? Sometimes people will send me something, and I see things online, and it's so disrespectful to both Darrell and Vinnie, and it's totally disrespectful to us too. And it's just, like, 'Man, if you don't wanna come, you don't have to come.'

"One of the first things I said to Philip on the phone, I said, 'This, to me, is more on an emotional level than any other level.' This means a lot to me personally, to go out there and represent those guys and represent the PANTERA name," he continued. "And that's all I'd ever want for me. I don't care about it financially and stuff like that; this, to me, I had to do this. I didn't wanna see anybody else playing these songs but me up there."

Reflecting on his initial conversation with Anselmo about taking part in the reformed PANTERA, Charlie said: "I was so excited about it. I said, 'Thank you for thinking of me.' And they were, like, 'There was nobody else.' And that made me feel really good. Because they knew my relationship with Darrell and they knew my relationship with Vinnie. And I loved those guys, and I love these two guys just as much."

Posted by MonterreyRock on Tuesday, December 6, 2022 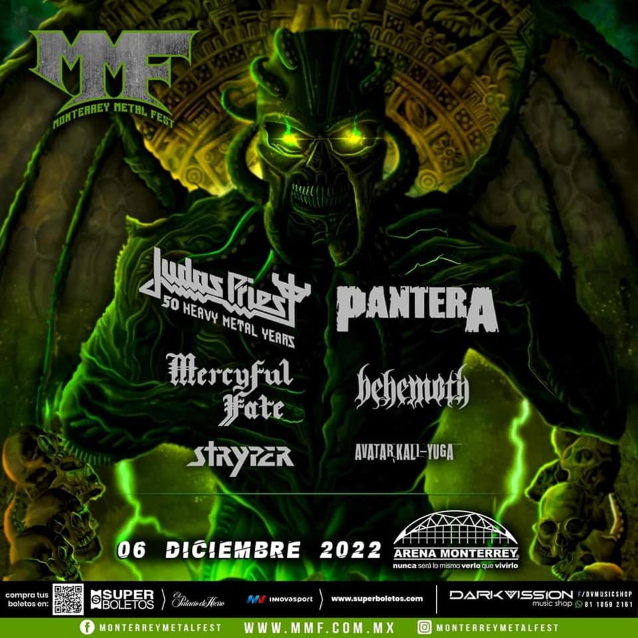