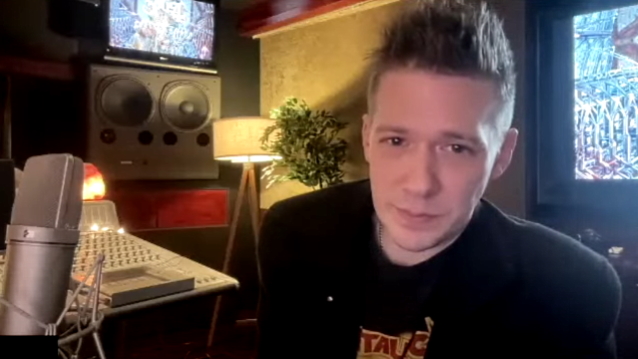 Tobias Forge, who fronted a pre-GHOST death metal outfit called REPUGNANT, was asked in a new interview with Loudwire if he could ever see GHOST writing and recording a death metal song. He responded (as transcribed by BLABBERMOUTH.NET): "No, I don't think so. I believe that it would be… Because I've tried to build this world where there were no obvious rules, still there's a certain… It's kind of like making a timepiece film where if it's about Vikings, you can't wear a Casio digital watch. And I think there are elements in music that just might become that sort of digital watch or a 'Transformer' toy that just comes in and just screws up the picture in a way that… I would rather entertain writing death metal with everything that comes with that… If death metal is this bubble here, GHOST can be this, and maybe there's this little passage where they can sort of meet, where there are elements from that that leak through. But playing a straight death metal beat would just feel strange, I think, in that setting."

Pressed about whether he still gets the urge to pursue death metal in some fashion, Tobias said: "All the time. I love that stuff. I listen to it a lot. I'm still obsessing over it from a collecting point of view. That's very much where my adolescent heart is. I grew up with a lot of music, but my adolescence was completely immersed and completely swamped with that impression.

"I still get the same kick out of things that I liked as a — not even a teenager; as an 11-year-, 12-year-old, when I really started listening to that and when death metal was this really dangerous animal that you can just go to this one store to find," he continued. "And I'm still sort of chasing that.

"I have my safe spot inside where all that is, and, of course, it's materialized in a lot of physical things that I'm collecting. But I still feel that sort of urge to, in some way or form, partake in it. But I don't know in what form it will materialize.

"I think that there's another conflict… Since I never really did it professionally… Or let's be real — I never did it professionally; it was very unprofessional in every way," Forge added. "That is not exactly what I wanna do. I don't wanna have sort of messed up rehearsals where we end up drinking instead and you end up coming to a show with a plastic bag and a broken pedal and you have to borrow cords from other bands and then you end up playing a really drunk show in front of 20 friends. Which is fun as fuck, but as a grown-up… It's kind of like in 'Comfortably Numb' where he sings, 'That child is gone. I can't feel that way.' I can't paraphrase what he's singing in that, but he says it in such a great way where you know it's there, but it will never feel the same. You can never be revirginized [laughs] for real. But I live on hope. So I think that there will be a time for that rockage too. But it will not necessarily be the way it was."

Forge formed REPUGNANT in 1998 and performed under the name "Mary Goore", eventually releasing a few demos and an EP before recording their lone full-length "Epitome Of Darkness" in 2002. REPUGNANT called it quits in 2004, with Dutch independent Soulseller Records releasing "Epitome Of Darkness" two years later. The album — a veritable concoction of vintage Stockholm death metal with obscure, eerie melodies — had only mild impact upon its release but appears to have preceded the current crop of death metal bands who have parlayed largely the same formula to greater underground metal notoriety.

In a 2018 interview with BLABBERMOUTH.NET's David E. Gehlke, Forge was asked whether his success with GHOST ever made him reflect about his time with REPUGNANT. He said: "The one thing I don't think was very evident just because of how things played out with REPUGNANT, was that, if you asked me in 1999 or 2000 or 2001, I really wanted REPUGNANT to be signed up by a Roadrunner or Nuclear Blast or a big label. I wanted to be super-professional with the band. At the time, we were very unfashionable. It was just not asked for in that sort of realm and had things been played out differently or maybe I played my cards differently, because if I look back on how I did things, it was unprofessional and I didn't really have the foresight, I guess. I had the dream, but I didn't have the foresight. We were picked up by a real label at the time and got a manager and had everyone kept their ducks in a row, I would have loved to have that band, the closest example of a band like that could be comparable is like AMON AMARTH. A real band that was out touring. I always wanted that. I really wanted to become a big band. I wanted that, but I couldn't. I don't know if we were good enough or whatever. Now, knowing a lot of the things that is required, how many stars that need to align and all the decisions you have to make, I can definitely look back on myself as a 21-year-old and quickly see why I didn't achieve that with REPUGNANT. I wasn't mature. I wasn't thinking. I wasn't there yet."

The last-known lineup of REPUGNANT included current and former members of IN SOLITUDE, TRIBULATION and WATAIN, providing a mish-mash of some of Swedish metal's most critically acclaimed bands of the last decade. Forge said that he had repaired the relationship with his former bandmates after the split but warned against the idea of a full-blown REPUGNANT reunion. "I think the band that was REPUGNANT on 'Epitome Of Darkness', I think we are now better friends than we've been over the last ten years, at least, ten, fifteen years," he said. "We had various degrees of falling out for different reasons. It just sputtered out. We've had our disagreements and whatnot, the same shit that everybody goes through. But, nowadays, we don't really have much to do with each other anymore, but we're just friends. We're all, except for one of us, we all have kids, we're all married. We're old dudes. [Laughs] I don't feel very old. We're a little bit wiser now and maybe that alone gives us a reason to not sort of resuscitate that corpse again. Just let it lie."