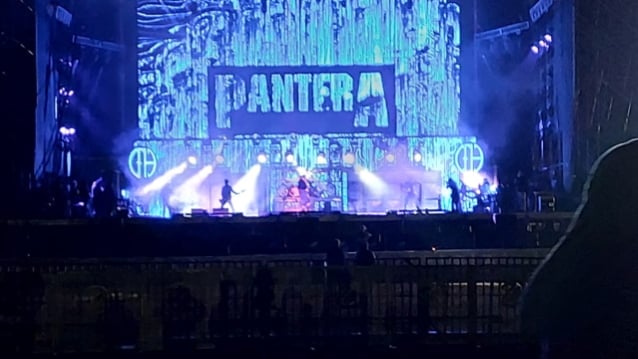 Fan-filmed video and photos of PANTERA soundchecking for its first show in over 20 years, which will take place tonight (Friday, December 2) at Mexico's Hell & Heaven Metal Fest, can be seen below.

As previously reported, the reformed band — featuring PANTERA's surviving members Rex Brown (bass) and Philip Anselmo (vocals) along with guitarist Zakk Wylde (OZZY OSBOURNE, BLACK LABEL SOCIETY) and drummer Charlie Benante (ANTHRAX) — will headline a number of major festivals across North America, South America and Europe and stage some of their own headline concerts. They will also support METALLICA on a massive North American stadium tour in 2023 and 2024.

It was first reported in July that Anselmo and Brown will unite with Wylde and Benante for a world tour under the PANTERA banner.

PANTERA will play two shows in Mexico — Hell & Heaven Metal Fest and Monterrey Metal Fest — followed by appearances at three Knotfest festivals in South America. There will also be a one-off show with JUDAS PRIEST in São Paulo, Brazil and a headlining concert in Santiago.