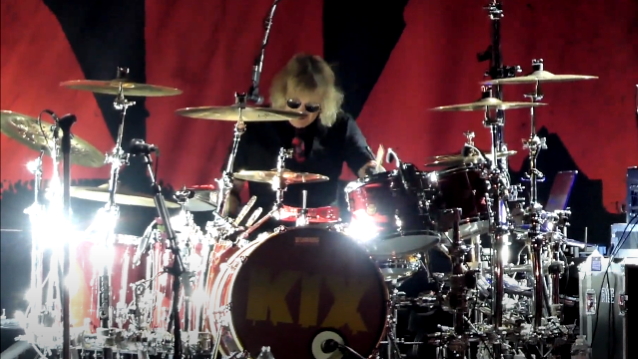 KIX drummer Jimmy "Chocolate" Chalfant is "doing great" after collapsing onstage last month and will resume playing shows with the band in February.

The incident occurred on November 18 at the first show of what was scheduled to be KIX's two-night stand at the Tally Ho Theater in Leesburg, Virginia with openers AMERICAN JETSET.

On Thursday (December 1),KIX bassist Mark Schenker took to the band's Facebook page to provide the following update on Chalfant's condition: "We all have spoken to Jimmy many times since that day and he left the hospital on Weds the day before Thanksgiving. He is doing well, and expects to be back on stage in February. He has a defibrillator/pacemaker installed under the skin in his chest and he's still pretty sore from that surgery. Other than that he's feeling great and in good spirits. We are all in regular contact with him.

"Jimmy also wanted to share the details of what happened with you and since I was there, we figured it best to tell it from my perspective.
We had just finished 'Cold Blood' and were about to go into the last song of the night which is 'Fuse'. Steve [Whiteman, vocals] was doing his 'are you ready' speil to the crowd and I turned around to start the intro and Jimmy was slumped over his toms with his head down. I thought he was fixing his kick drum pedal. He was not moving and Sam Stilwell (drum tech) was moving towards him to assist with what we all thought was a kick drum pedal issue. I motioned to Sam and said 'poke him, poke him' Sam did so and looked back at me and said 'not good, not good'. Somehow Brandon Dull (guitar tech) appeared back behind the drum riser as well and I said 'let's get him off there now and over here' where there was space behind Brian's amp to figure out what was going on. Sam and Brandon carried Jimmy off the riser and laid him down. I checked his neck for a pulse and put my ear to his mouth and nose to see if he was breathing. I looked up at Brandon who was holding his wrist checking for a pulse and with a serious look on his face he said 'I got nothing' I replied the same. One of us (don't recall who) flipped open his eyelid and his pupil had no response to the bright stage lights. He was definitely completely unresponsive. Neither Brandon nor I said a word, I just tilted his head back, checked his airway and started giving him rescue breaths and Brandon started chest compressions. At some point, Steve called Jimmy's wife Cathy from the stage and Bob had shouted to his guitar tech Greg Gelles to call 911. The crew held up a drapery so the crowd couldn't see us working on Jimmy. Cathy had run to her neighbors for a ride and was en route with Steve keeping her updated. While Brandon was compressing I kept lightly slapping Jimmy's face saying his name desperately looking for some sign of life. Brandon and I continued to give him some pretty intense CPR until the medics arrived, at one point I heard Jimmy's sternum (or maybe a rib or two) crack while Brandon was doing compressions which is a good thing. I don't know how many CPR cycles we gave him but it seemed like an eternity. I must admit that after a few minutes in, I thought 'shit this isn't working, he should be responding, we're losing him'. I was scared shitless that our dear friend was going to stay dead right in our hands. Again, he had no pulse and no breathing when we got him to the side stage, white as a ghost with no color in his lips and no response in his eyes. I started another pair of rescue breaths and suddenly I could feel his lungs pushing back on my breaths which means he was starting to breathe on his own. Then he opened his eyes and started to groan but was still unconscious. Brandon got an inconsistent pulse on his wrist and that was what I got from his neck as well. So we kept administering CPR until the medics arrived. Maybe 6-7 minutes had elapsed since he collapsed on his drums. By the time the medics arrived we had revived him somewhat and they took over, hooked up a vitals monitor, put him on an oxygen squeeze bag to assist his breathing and started an IV. I could see on the monitor that his heartbeat was there and strong, though irregular, with good blood pressure and he was still groaning with his eyes open. They decided to hook up an AED and shock him. Same weird looking heartbeat on the monitor. They shocked him again and this time his heartbeat was strong and perfectly regular, still with good blood pressure and good O2 level in his blood. He was stabilized! They put him on a stretcher and took him to a hospital minutes away from the club, INOVA Lansdowne here in Virginia.

"That gig at Tally Ho Theater was supposed to be a two nighter so the crew started packing up the gear. I went up to the dressing room with tears rolling down my face trying to go over everything in my head, did we do everything right? Did we do everything in the right order? Did we forget something crucial? We were all speechless and it was quite traumatic. It was definitely the most terrifying five minutes of my life!

"One of the guys who works at the venue is a retired firefighter and one of the medics texted him and let him know that Jimmy was awake, talking, sitting up in bed and moving on his own in the hospital. What a collective sigh of tremendous relief we shared. We all went and saw him in the hospital after and as the medic said, he was fully aware, moving around and laughing a little with his wife Cathy by his side.

"Jimmy doesn't remember anything from the end of 'Cold Blood' to when he awoke in the hospital. Luckily, Brandon is a Nationally and MD State Certified Paramedic and I'm a Master Scuba Diver Trainer, teaching Rescue Diver classes as well as a certified Emergency First Responder Instructor teaching first aid and CPR/AED. We made a good team and were able to save our friend.

"I don't want to think about what would have happened if we weren't there or if Jimmy was just driving around going about his daily life and cardiac arrest happened. If there is ever a right time and place for such a thing, this was it.

"Good news is it looks like Jimmy is doing great. The doctors found that the end of a stent that was put in last year had partially collapsed causing his cardiac event. They put a new one in and fixed him right up. He will be perfectly fine and we plan to resume playing shows in February after Jimmy goes through cardiac rehab. The only bad news is we have to reschedule the four remaining shows we had this year. Please, if you have tickets, reach out to the venues, check their Facebook and web sites. Our Agent is already rescheduling those gigs and announcements from the venues are pending.

"Jimmy would like to thank all of our peers and especially the fans for your concern, and the massive outpouring of genuine love and support. It has been particularly moving for all of us to read your positive comments and messages.

A couple of KIX fans who attended the November 18 gig shared videos on Facebook, with one person writing: "Please keep Jimmy from KIX in your thoughts. He just collapsed at the KIX show encore at the Talley Ho. No pulse and lots of CPR etc. Amazing show tonight. I hope it wasn't his last." A second fan added: "I was just watching KIX live at Tally-Ho in Leesburg, VA. The drummer Jimmy Chalfant collapsed on stage just before the start of the last song. Lights came on, 911 was called and the show was over. Prayers for Jimmy."

Howdy y'all! Mark from KIX here. We wanted to update you on Jimmy's condition. We all have spoken to Jimmy many times... 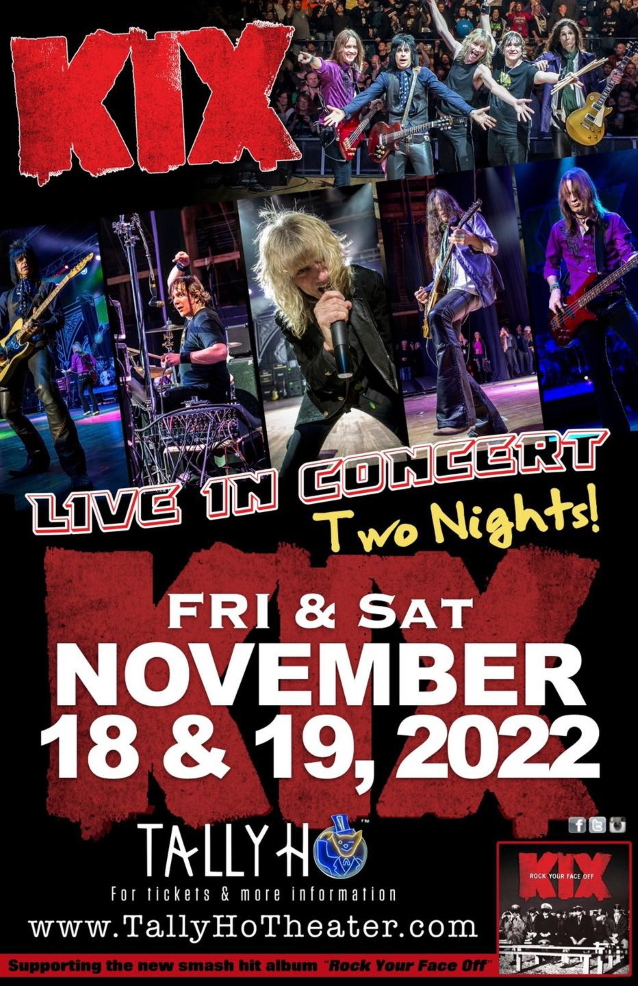